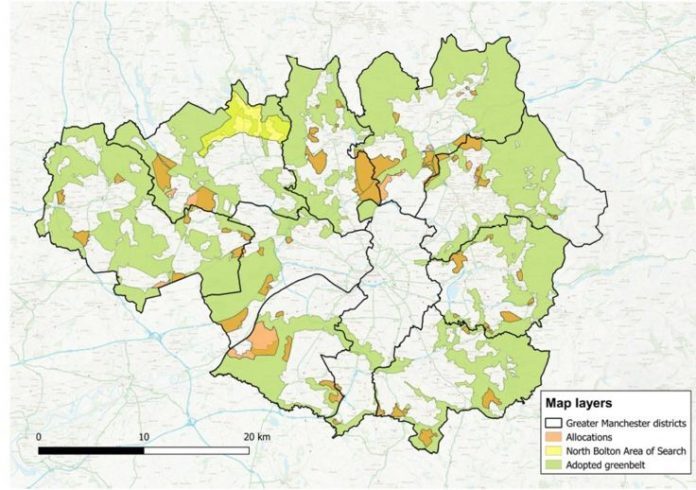 Plans to released Greater Manchester’s rewritten Spatial Planning Document originally scheduled for June have been put back a month.

This is as a result of significant extra work that is being done taking account of the implications of the recent local election results and to maximise the opportunities for town centre and brownfield development says the office of Greater Manchester’s Mayor Andy Burnham.

The original plan caused controversy as it included options to build on green belt sites at Pilsworth, Carrington, Cheadle Hulme and Ashton Moss, some green belt building said the plan  is “essential” to keep up with the city region’s growth.

“The Greater Manchester Spatial Framework is vital for the success of our city region and represents our best chance to solve the housing crisis. It will be a bold, ambitious plan to ensure that we have the right homes and jobs in the right places, and the transport connections and infrastructure to support developments.

“So we need to make sure that this plan is as good as it can be before we ask Greater Manchester people what they think of it. Therefore we’ve revised the timetable for publication to do the additional work necessary to set out a clear vision for the future. This also demonstrates to the public that we are taking account of the issues raised during the recent local elections.”

“Throughout the development of the new draft of the Spatial Framework we have committed to listening to and engaging with the public.

“The framework is a huge part of securing our shared future success and we are determined to ensure it is as good as it can be for the people of Greater Manchester.

“We will continue to keep the public updated on our progress as we carry out this important piece of work.”