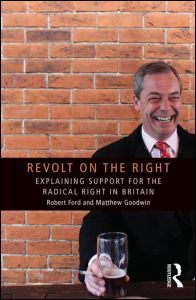 A book co-written by a political scientist from The University of Manchester has won the prestigious Political Book of the Year award at the Paddy Power Political Book Awards.

Revolt on the Right: Explaining Support for the Radical Right in Britain by Manchester’s Dr Ford and Nottingham’s Dr Matthew Goodwin, was praised by the judges as ‘ground-breaking’ and ‘essential and enjoyable reading’. It is published by Routledge.

The book was of one of two books co-authored by Dr Ford to make it onto the shortlist of the awards.

The other, an edited volume called Sex, Lies and the Ballot Box published by Biteback, made it onto the Practical Politics Book of the Year shortlist. It was co-written with Nottingham’s Professor Phil Cowley.

A cheque for £10,000 donated Lord Ashcroft was presented by the peer at a ceremony hosted by impressionist and comedian Rory Bremner.

Lord Ashcroft said: ‘Revolt on the Right is an insightful book which is scholarly and analytical yet accessible and readable at the same time. It is a superbly timed work that does exactly what it says on the tin, charting the reasons for the rise of UKIP as a political force. Once again, I am delighted to have supported this prestigious event.”

Revolt on Right describes Ukip’s rise and rise from its founding in 1993 by an LSE history lecturer into what the authors describe as a powerful force on the British electoral scene.

It is, according to the Guardian, a ‘sparky’ academic study of the rise of Ukip. It is, adds the FT, the first major academic study of Ukip to debunk the idea that its core support is made up of ‘choleric ex-colonels in the shires’.

The book’s argument, says the Guardian, that Ukip appeal to the “left behind”, is now widely used.

And the edited volume, Sex, Lies and the Ballot Box, is described by the Guardian and Independent as a ‘fascinating’ collection of essays.

It describes quirky facts such as why councillors should change their name to Aaron Aardvark and why men are bluffing when they seem more knowledgeable about politics than women.

Dr Ford said: “I’m very honoured that my work has been recognised by such a prestigious panel of judges.

“The competition was so stiff- but to have even got this far is a great achievement. I would also like pay tribute to everyone with whom I collaborated, it was great working with them.”

Volunteers at The Lowry win 2015 Queen’s Award for Voluntary Service.

Life Expectancy for Mancs is still the lowest in the country

Red wine may not be as good for you says study