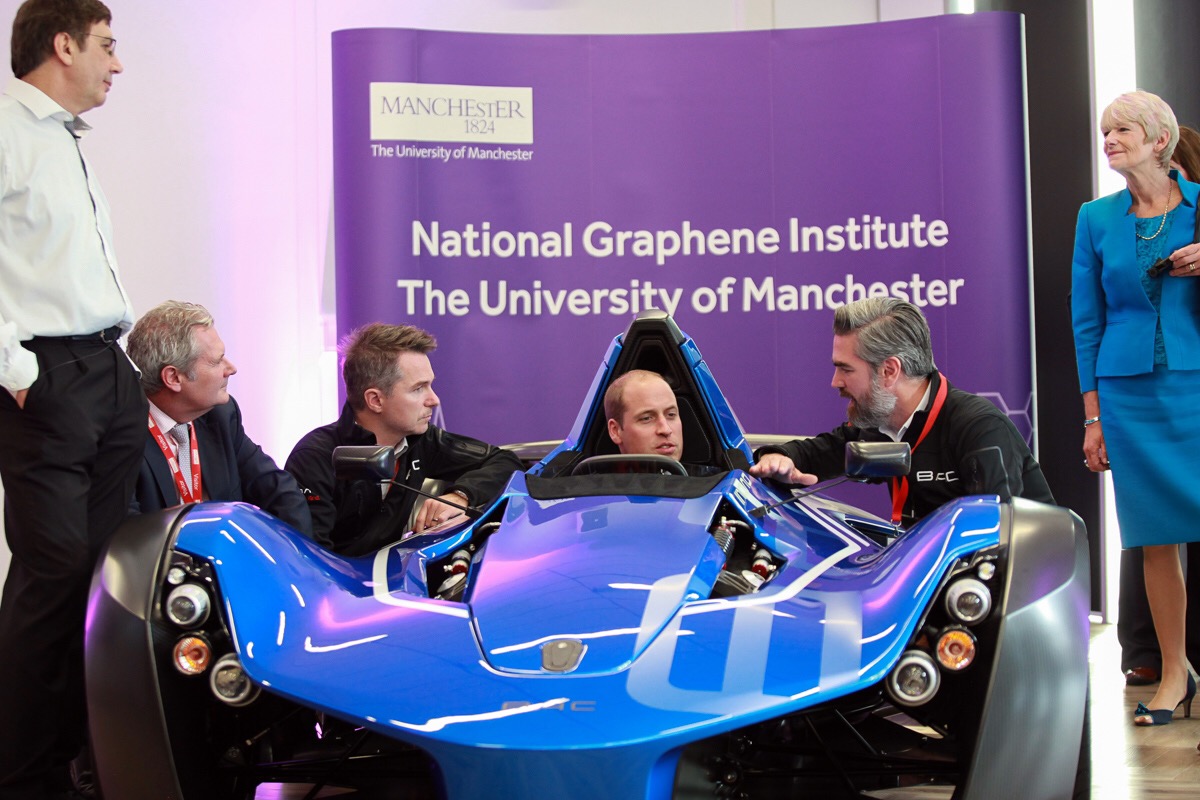 Their Royal Highnesses The Duke and Duchess of Cambridge visited the University today (October 14) to learn more about world-leading graphene research and celebrate the University’s new Manchester Engineering Campus Development.
During a royal visit to the city The Duke and Duchess visited the National Graphene Institute (NGI) at The University of Manchester and were welcomed by the President and Vice-Chancellor, Professor Dame Nancy Rothwell, and Professor Martin Schröder, Vice-President and Dean of the Faculty of Science and Engineering.
During the tour of the state-of-the-art NGI, the Duke admired the BAC Mono single-seat supercar, the world’s first car to use graphene in the production process. The British-built BAC Mono has graphene composite rear wheel arches, which notably reduces the weight of the car and provides a performance benefit to the driver.
The BAC Mono is designed and built in Liverpool, and uses graphene supplied by Haydale.

Personalised 3D-printed toy cars also incorporating graphene were presented to the Duke and Duchess as gifts for Prince George and Princess Charlotte.

Graphene is the world’s first two-dimensional material, just one atom thick yet 200 times stronger than steel. It’s flexible, transparent, more conductive copper and can form an impermeable barrier to gases and liquids.

Following their tour of the NGI, the Duke and Duchess continued on to the site of the Manchester Engineering Campus Development (MECD). Due to open in 2020, MECD is one of the single largest construction projects ever undertaken by a higher education institution in the United Kingdom.

Speaking during the royal visit, Professor Dame Nancy Rothwell said: “MECD will create a world-leading teaching, learning and research campus to develop the engineers, scientists and innovators of tomorrow.

“It is an honour to be joined by Their Royal Highnesses The Duke and Duchess of Cambridge as we mark the commencement of the next milestone in the University’s campus masterplan.”
MECD, which is under construction by Balfour Beatty, will be home to four engineering schools and two research institutes, comprising 1,300 staff and 7,000 students.
Whilst on site The Duke and Duchess sealed a time capsule which will be displayed within the building once construction is completed. They also unveiled a commemorative plaque to mark the occasion.
Professor Martin Schröder said: “Over the past one hundred years the University has celebrated many achievements in science and engineering. Graphene is just one of the many landmark achievements in innovative research by this University, with many more yet to come thanks to developments like MECD.”
The Duke and Duchess’ visit to the University follows a series of engagements around the city including The National Football Museum and the Town Hall before attending Francis House Children’s Hospice.