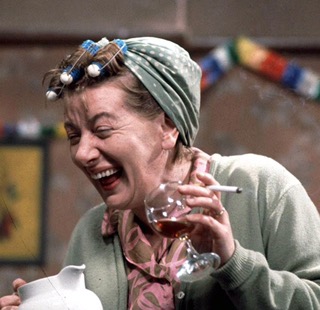 Tributes have been pouring in after the death of former Coronation Street Actor Jean Alexander who has died at the age of ninety.

Jean played the character of Hilda Ogden on the soap for 23 years between 1964 and 1987 instantly recognisable with her trademark hair curlers and pinny, a costume said to be inspired by the Liverpool munition worker’s dress during the Second World War.

She was admitted to hospital on Tuesday of this week also the day of her 90th birthday, and died peacefully in her sleep early on Friday.

Born in 1926 in the Toxteth area of Liverpool, she initially worked as a library assistant but her love of theatre and especially of Shakespeare saw her move in the works of Rep theatre and made her stage debut in Macclesfield in 1949, performing in a different play each week as she toured the theatres of the North of England.

Her first TV appearance was in the BBC in Z Cars and first joined the cast of  Corrie in 1962 appearing as a landlady who rents a room to a disturbed young woman, Joan Akers, who kidnaps a baby to replace her own dead child.

The two would provide the show with some of its most comic moments, her “murial” of flying ducks on the wall of the terraced house, her winning of a  luxury hotel break where after kissing Hilda, Stanley asked what her lipstick tasted of. The reply came: “Woman, Stanley. Woman.”

While her continual battles with the likes of Annie Walker, Elsie Tanner and Rita Fairclough were legendary

But there were also highly dramatic scenes, notably the death of her on screen husband when Hilda was seen silently unwrapping a parcel of his belongings and breaking down when she opened his glasses case.

She left the show in 1987 leaving in the show’s story line to work as a doctor’s housekeeper in Derbyshire later saying that she no longer watched the show because there was too much sex.
After Corrie Jean played Auntie Wainwright in Last of the Summer Wine, a role she continued for twenty two years.