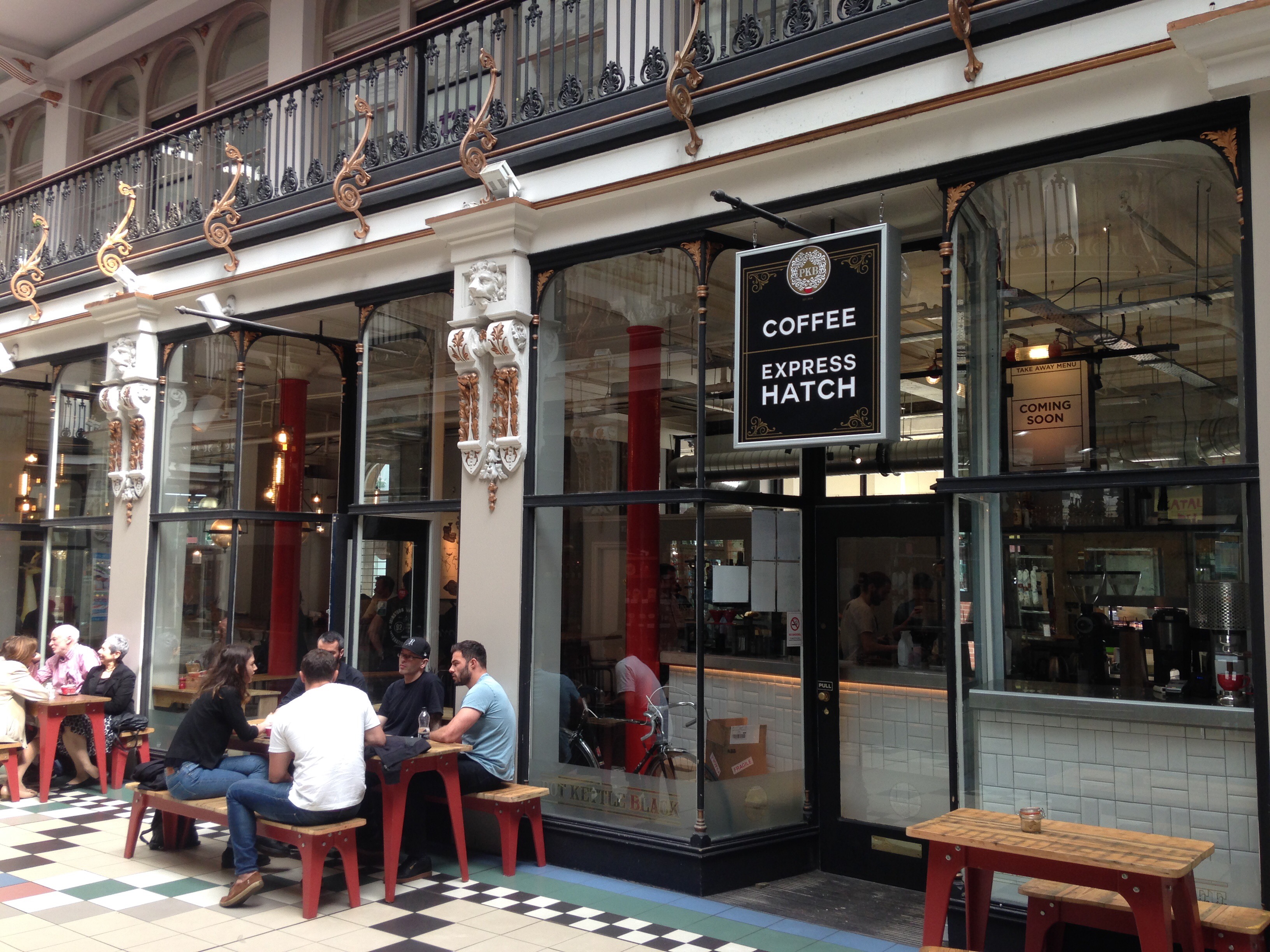 The popular speciality coffee bar reopened on Tuesday 7th June following the refurbishment works, which include a new kitchen and a new express hatch for coffee and healthy breakfasts to go. The renovated premises have expanded into what was the infamous Tracy’s sandwich shop next door. The new space now allows for an additional 20 covers and more great coffee, served in the same great PKB atmosphere.

About Manchester went to take a look

When I first went into PKB late on Tuesday morning for a latte I was surprised by how empty it seemed, apart from a couple of the compulsory office meetings/ interviews being held there, voices reverberating around the venue in competition with the fairly loud music playing, rather more of a bar atmosphere.

The old wood ‘communal’ tables and chairs seemed cold and uninviting but I was able to snaffle a corner on the comfy padded area of seating. The coffee as advertised was delicious and my latte was delightfully served on a mini silver tray in an old school dinner type glass complete with matching glass of cool tap water and a brandy snap biscuit.

I returned the next day and was taken with the change to the place. Yes the interviews and business meetings were still taking place and more of them too (definitely could be a good business idea for them to allow tables to be booked for such meetings) but the music was lower and not intrusive and the diversity of PKB’s clientele was evident.

Ladies that lunch alongside lone workers, interviewers, business meetings and those that were listening to their own music on their headphones with young friends meeting up in maybe what were between study periods.

Whilst I would have loved to sample the Eggs Saganaki I felt chilli may be better suited to an afternoon brunch and so in memory of Tracy’s sandwich shop which used to trade from the extended part of the venue I decided to have the fried egg breakfast muffin but instead of the fried spam to go with it this was with a chorizo sausage, cheese and tomato relish …. Delicious!

The most popular items were the Eggs Royale and Eggs Benedict with pork loin sourced from over the Arcade at Lunya Deli and whilst I didn’t taste these they appeared beautifully prepared and looked every bit as tempting as those you view on their website.

Again my coffee (a flat white) was tasty and served in the same way, apart from being in a red cup rather than a glass it’s only downside being they do not serve skimmed milk only semi skimmed.

If I was asked to describe PKB today I would say it was like what I imagine an Ideas Room would be like at Google HQ, animated with a diverse range of people all getting on with their thing.