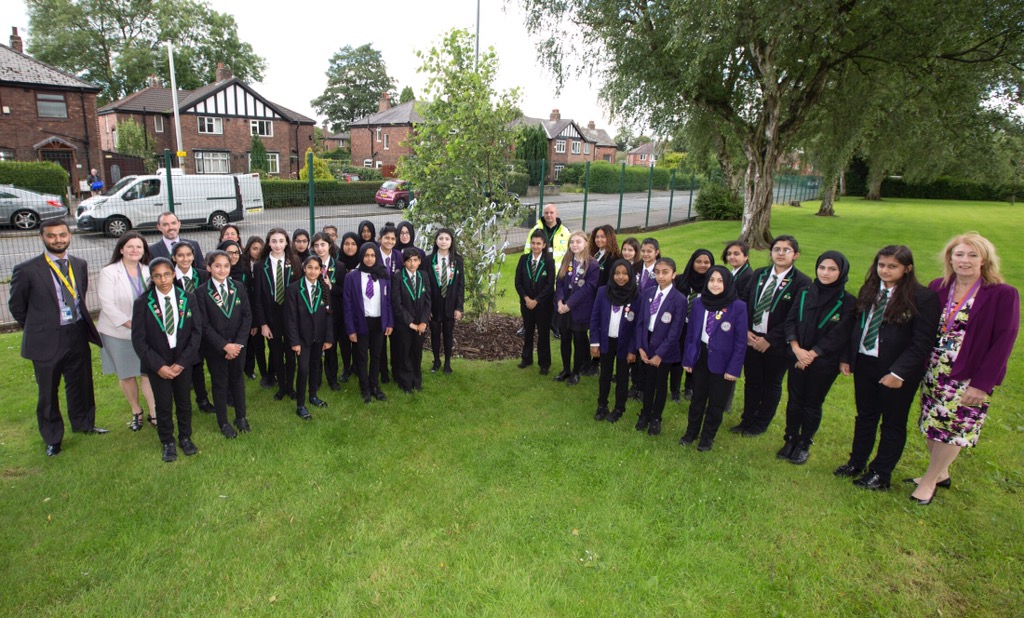 Children from two Greater Manchester schools joined Greater Manchester Police to remember victims of so called honour based killing, marking a national day that falls on the birthday of victim Shafilea Ahmed.
30 pupils from Levenshulme High School and Whalley Range High School came together to mark the day and remember the 12 people who are killed by family or friends in the name of honour on average every year in the UK.

14 July is a national day of remembrance started by charity Karma Nirvana in 2014. Shafilea Ahmed would be turning 30 years old on the day had she not been murdered by her parents, Iftikhar and Farzana Ahmed in 2003. Since then, campaigners have talked about her life to make people aware of honour based abuse and the need to speak out on such issues.

DCI Nicky Porter from GMP said: “This day is an opportunity for us and these children to stand with victims of so called honour killing, pay our respects to those that have been murdered and reinforce our commitment to tackling these horrific crimes.

“Over the last year we have seen 105 reported cases of honour based abuse in Greater Manchester, with crimes such as forced marriage and female genital mutilation being tackled by our specialist teams. It’s really important to point out that these are the kinds of crimes that can lead to so called honour killings with people suffering years of abuse at the hands of the people who are supposed to protect them. These types of crimes will not be tolerated in Greater Manchester and we will do all that we can to educate our young people on the signs to look out for and what to do if they are worried.”

The event comes just weeks after GMP sought to educate children on honour based abuse through a new teaching resource. The play Not in my Honour saw GMP commission Contact’s Creative Experts to work with Levenshulme High School for girls, Manchester Grammar School for boys and writer Aisha Gill to create a play that teachers across the country can use to teach pupils about the issue.

Not in my Honour explores practices that can include forced marriage and transgender issues and the impact that honour on peoples’ lives. Referred to as ‘honour-based abuse’, these practices cut across all cultures, nationalities, faith groups and communities and transcend national and international boundaries. The project saw Contact Experts work with around 20 pupils from each school to create a play that was performed at Manchester Grammar School on the 29 and 30 June.

Deputy Police and Crime Commissioner Jim Battle said: “Today we remember the many women and men who have lost their lives at the hands of a loved one. By working with young people and our communities we can shine a light on this hidden crime, encouraging more people to speak out, report it and get the help and support they need. That will be a lasting legacy for all victims of honour-based abuse.”

Sergeant Nita Jhanji-Garrod from GMP added: “Having worked alongside the children who helped create Not in my Honour, their commitment and dedication to this project has been commendable. By taking part in this they will be helping to protect other young children from these crimes and they should be really proud of that.”

Heartfelt tribute to a beautiful daughter

How should cities like Manchester respond to vehicle attacks