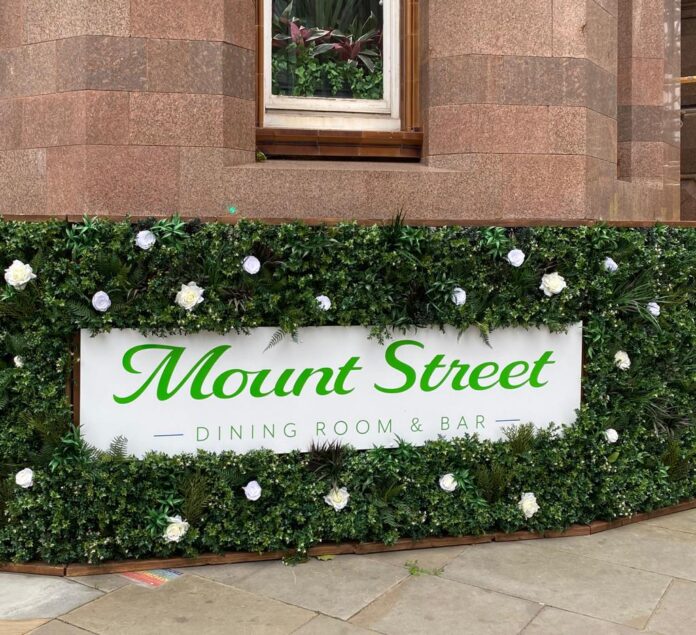 It’s just fantastic to be back doing my restaurant reviews and long may it continue as I have really missed it.
I was invited to try out the new Mount Street Dining Room in the Midland Hotel and, although I did have to think about it a little bit as it seemed like a big step getting the tram into town, I was very pleased that I made the effort to go.
Once you are at your table, it was just like going back to how things were before we found ourselves in this awful pandemic.
To get myself into the swing of things, I booked an early dinner reservation expecting the restaurant to be empty but there was a great vibe and the bar was very busy which was lovely to see and hear.
Although the restaurant has been recently refurbished, it still has a similar look and feel to the old Mr Coopers but feels fresher, less posh and more open. The decor is very tasteful and there are many posters with a nod to the old railway hotel.
They now have beautiful leafy up-lighters crafted from metal that helps to set the chilled feel of the place and the 1980’s music in the background provoked many memories. There are still several trees and bushes strategically placed around the restaurant that caused great amusement as a couple of the lollipop trees reminded Mr Carnivore of the bonsai tree that Keith Lard set fire to in Phoenix Nights.
The tables are very well spaced and the majority of customers were also following the rules which, if I’m honest, was a great relief.
Most of the staff were wearing masks but a few also have visors so it is a little difficult to hear what they are saying but given a bit of time, we will all be much better at this. Who knew we all relied on lip reading so much.
We had to hang around a bit before we realised we had gone in through the bar entrance and were standing in the wrong place. We’d have been better to go through the hotel as this is where the reservation desk is.
They have an extensive drinks and wine list with a good selection by the glass and many spirits to choose from. I had the Australian Chardonnay that was perfectly chilled and Mr Carnivore had the Shiraz that, by all accounts, was delicious.
It was £34 for a bottle of Prosecco and this seemed really steep to me but, it has been that long since I’ve been out, I’ve got used to paying £7 a bottle from the local supermarket.
I did struggle a bit to see the pale green font of the menus so remember to take your glasses and your smartphone light!
We were a bit gutted that the pork pie had sold out but we took it that the universe had decided we needed to be a bit more healthy.
It was a tough choice but we finally landed on ordering the house sourdough bread with fluffy roasted walnut butter (£3.50) and lobster crumpets with black and white sesame and Hollandaise (£14.00) to start.

The plentiful bread was really fresh and the butter was not overpowering at all. The lobster crumpets were a real surprise as we were warned they would take 15 minutes so I was expecting them to be hot but they were cold, light, citrusy and gorgeously rich.
The other surprise was that they were completely covered in the black and white sesame so don’t order if you’re worried about the seeds getting stuck in your teeth!
Mr Carnivore ordered the Chorlton Ale braised beef featherblade with smoked mac n cheese (£15.50) and a side of triple cooked chips (£4.00). It was a massive portion and the beef was very soft with an unusually sticky texture. The rich beefy sauce completely complimented the dish and the tiny crispy onions on top of the meat were the unexpected gems of the plate.
The mac n cheese was good but slightly stodgy and the additional portion of chips, although delicious and very well seasoned, were unnecessary but, devoured all the same.
I had the BBQ’d purple sprouting broccoli that came with potato gnocchi and goats cheese (£13.50) plus another unnecessary and not quite so well seasoned side of truffled fries (£4.50).
This course was very good but I had to put my reading glasses on to differentiate between all the items on my plate. The gnocchi was incredibly fluffy and some of the broccoli had the texture and crunch of crispy seaweed that was delightful.
If I’d had been braver and less worried about taking the wossname, the Chateaubriand (£75 for two) or the homemade beef Wellington pie (£80 to share) would have made very interesting choices.
Although we were ridiculously full, the giddiness of being out in a proper restaurant got to us, so we ordered dessert too.
Mr Carnivore had the warm ginger loaf with butterscotch sauce (£6.00). This was a relatively small portion but was very gingery and had an unusual grainy texture.
I decided to have the chocolate orange flamed Alaska (£7.50) and when it arrived, it looked like a white hedgehog on my plate. It was an enormous portion and would have easily done two people. My only disappointment was that I was expecting Sara Lee type meringue from 1972 but this was more modern à la blowtorch. The ice cream was a little icy but you could really taste the orange.
My only real criticism of the whole experience was that I personally wasn’t very comfortable having paper menus that other people had touched. Apparently this is perfectly acceptable but in other restaurants I have liked the fact that the menus are single use for you and you alone that are then recycled.
In summary, it’s proper food done really well with a suitably modern twist so looks beautiful. The service was great and I felt very safe in the pleasant socially restricted environment.
The scores on the doors are:
Covid rules: 7/10
Food: 7.5/10
Service: 8/10
Ambiance: 9/10
Overall: 8/10