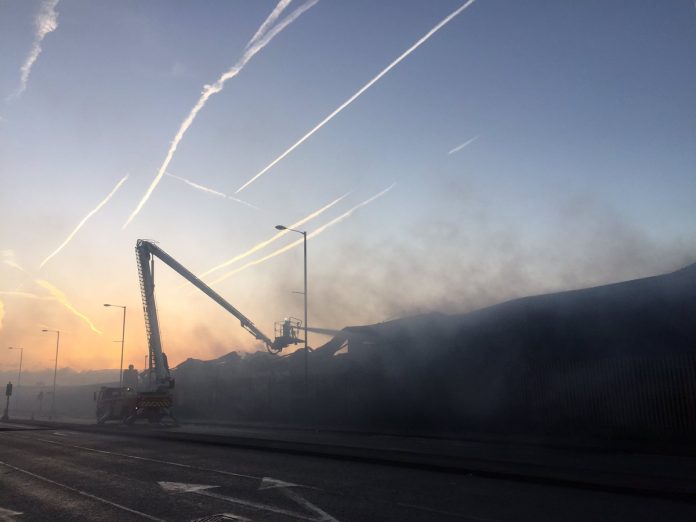 Residents effected by yesterday’s fire at the Wing Fat Chinese Suopermarket in Beswick yesterday have been asked to attend a meeting this evening at the Grange Centre Pilgrim Drive at 6pm.

Firefighters have been visiting the Grange centre this afternoon to update residents who’ve been unable to return home after the fire which broke out yesterday lunchtime.

Earlier this afternoon, the Fire service tweeted that the smoke has now dissipated and that they were assessing nearby properties and doing all we can to get people back home and roads.

A demolition contractor is set to remove the roof to provide better access for firefighters to tackle the remaining small pockets of fire in the fire and explosions caused by gas cylinders in the building.

It’s still too early to determine any cause of the fire say fire chiefs.

Group Manager Paul Duggan, who was in charge of the incident on Wednesday afternoon, said: “Until this afternoon fire crews have been unable to access the building due to it being unsafe because of a partial roof collapse but we now have demolition contractor removing the roof, which means firefighters will be able to access and extinguish the remaining pockets of fire. We will continue to do this into the evening until dark and then start again in the morning.

“Roads surrounding the building remain closed including Ashton Old Road and at the moment it is unclear when the roads will be reopened – we understand this is frustrating and inconvenient and we are working with partners to minimise disruption and get the roads open as soon as possible.

“We have been monitoring the smoke plume which has now dissipated and we hope that we will be able to let residents back into their homes soon, although we can’t say for certain when that will be.

“In the meantime, fire crew from Gorton Fire Station have been visiting residents at the Grange centre which has been set up as a rest centre for evacuated residents to provide updates and information to support them.”

All staff at the warehouse have been accounted and it is not believed there is anyone inside but until fire crew are able to do a full search of the building they cannot confirm everyone is accounted for.