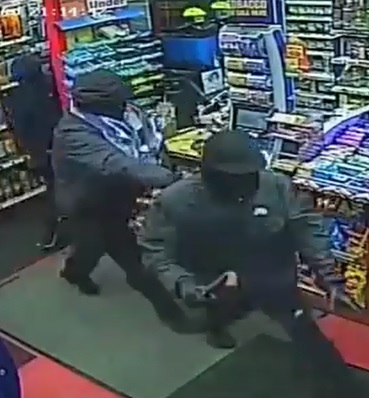 Police have released CCTV of the moment Armed thieves assaulted a shop worker during a robbery in Stalybridge.

The men proceeded to threaten two members of the public with their weapons before fleeing in a grey Toyota Aventis driven by a fourth offender which was later recovered on Cambridge Street, Stalybridge.The car had been burnt which also caused damage to two vehicles belonging to members of the community.

The victim was treated by paramedics for his injuries.

Police have released CCTV footage of the incident and are appealing for anyone who may have any information.
Detective Constable Jo Lockett of GMP’s Tameside borough, said: “This was a shocking attack that has left the victim, shop owners and members of the community extremely shaken.

“We are doing all we can to catch the men responsible and have released the CCTV footage in the hope that someone might remember seeing something that can assist our investigation.

“If you remember seeing anything in the area at the time of the robbery, or have any information about it that could help our investigation then please contact police so that we can bring the men to justice.”