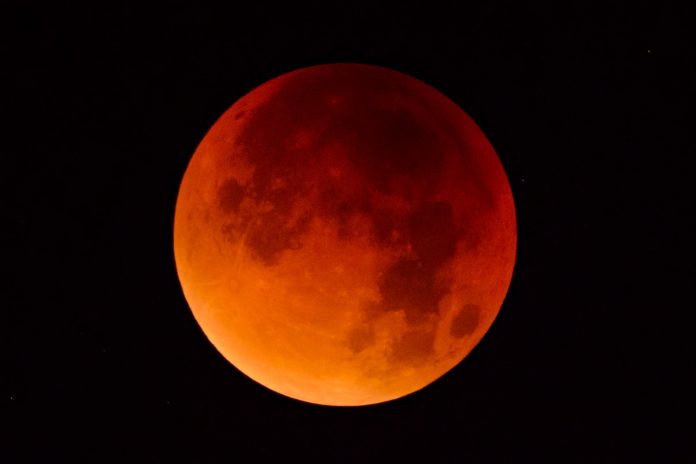 A lunar eclipse Blood Moon will peak in the night skies over Manchester this Friday.

It is the second Blood moon of the year as the light from the sun is blocked by the earth shadow.

The further north you are in the country, the later the moon will appear,in Manchester, the moon will not rise until after 9.06pm BST and the maximum eclipse will occur at 9.21.

It will be the longest eclipse of the 21st century and at its maximum visability will last for 1 hour and 43 minutes.

The moon turns red even though the light of the sun is blocked out  because some of the sunlight going through Earth’s atmosphere is bent around the edge of our planet and falls onto the moon’s surface. Earth’s air also scatters more shorter-wavelength light in colours such as green or blue, what’s left is the longer-wavelength, redder end of the spectrum, the same effect that we see here on earth for sunrises and sunsets.

The lunar eclipse on Friday is not the only celestial high spot of the day.The planet Mars reaches its opposition, when it will shine at its best in the night sky. This month, Mars will be at its closest to Earth since 2003.

The Blood moon was in the past seen as a fore bearer of dome.Some people believe that the blood moon will signal the end of time.The theory having biblical origins in the Book of Joel, Acts 2:20 and Revelation 6:12.

Here, it is written: “the sun will turn into darkness, and the moon into blood, before the great and the terrible day of the Lord comes.”