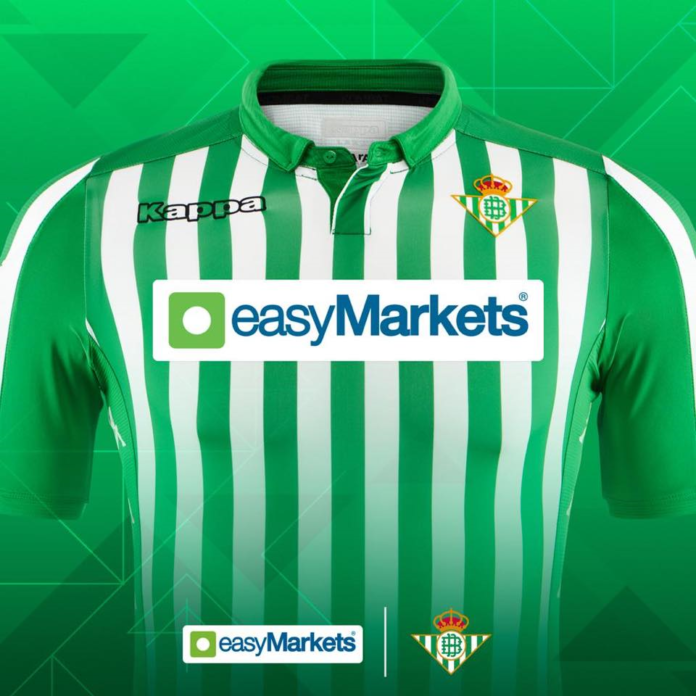 easyMarkets is all set to sponsor La Liga Football Club Real Betis Balompie for the 2019-2020 season. The Spanish club has signed a three-year exclusive agreement with the forex broker, which is regulated by the Cyprus Securities and Exchange Commission (CySEC).

easyMarkets is a regulated broker that came into existence in 2001. Since then, they have provided their clients with a robust trading platform. And now, they have entered the sponsorship field with a historic deal with the renowned Real Betis.

As announced by the club on Twitter, Real Betis has signed a three-year sponsorship deal with the forex broker. As part of the contract, the Real Betis players will be sporting the green and white jersey with the broker’s logo in the front of the t-shirt. Real Betis’ new jersey was launched during the team’s first game against the Real Valladolid FC on 19th August.

The three-year contract with the online trader will provide the Spanish club with commercial stability. Although neither the club nor the broker has disclosed the cost of sponsorship, the new 3-year shirt sponsorship is worth a reported the US $2.2 million (€2 million) per season. However, easyMarkets has said that it will reveal more details about the deal very soon.

The firm believes that partnering with a sports team, football in general, will provide them with a huge opportunity for brand exposure and will give them the required exposure and recognition in the Spanish speaking world. Since football is a game loved by millions across the globe, it is a massive opportunity for easyMarkets to have presence felt in the unreached markets.

Almost two decades have passed since easyMarkets came into existence and this is the first time they have played a sponsor for a sports team. The broker offers a safe and secure trading environment to the clients. Especially during the Brexit, when the market was extremely volatile, easyMarkets was one of the few brokers that kept its promise of keeping the traders safe. This is the reason why people has a lot of faith in easyMarkets.

It offers the traders with Meta Trader 4 besides its own trading platform as well as fixed spreads, forwards on 117 instruments, and options on spot FX trading. These services come with premium and free trade protection tools, as well.

easyMarkets is regulated by ASIC and across the European Union through the Cyprus Securities and Exchange Commission. Hence, it offers error-free trade execution and protection tools with guaranteed stop-loss orders.

It has its own mobile application and offers over 150 instruments, including 15 indices, 29 options, 12 commodities, 97 currency pairs, and 22 metals. Also, it offers CFDs on three cryptocurrency pairs – ETH/USD, XRP/USD, and BTC/USD.

The first round of the La Liga 2019-2020 season has already kicked off with top 20 Spanish teams competing for the first spot. This isn’t the first time Real Betis Balompie has been sponsored by an online broker. Before this, for the past two seasons, the football club was sponsored by Green Earth, which is an environmentally friendly cryptocurrency company.