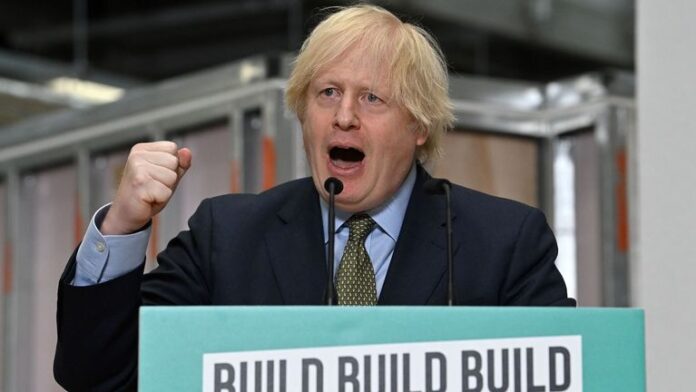 The Prime Minister has promised to “build back better” in the “wake of coronavirus,” pledging £5 billion in capital funds for schools, roads, hospitals and other infrastructure upgrades.

In a speech in Dudley in the West Midlands this morning he said that the Covid crisis is “the moment” to tackle the problems that have not been addressed for decades.

We tolerate “yawning gaps” between the best and rest, he says. We are not as productive as our global competitors, the Prime Minister notes.

There are so many millions who have to wait to see their GP, even before the waiting lists produced by the pandemic. Too many degrees are not delivering value, he adds.

London “in so many ways the capital of the world”, Mr Johnson says. “London leads the world and yet too many parts of our amazing country have felt left behind, neglected, unloved as though someone had taken a strategic decision that their fate did not matter as much as those who lived in the metropolis.”

He says that the country knew the economic cost of lockdown. Now we must combine the energy and drive with a “concentrated burst of willpower”, “We must work fast, because we have already seen a vertiginous drop in GDP,” he adds. We are waiting “with our hearts in our mouths” for the full economic impact to appear.

Boris Johnson pledges to build “fantastic new homes” around the country and “help young people get on the housing ladder”.

The Government will “shortly bring forward the most radical reforms” to planning since the Second World War, he adds.

“Covid has taught us the cost of delay,” ” HS2 will be “transformational” despite costing the equivalent of Sri Lanka’s GDP.”Time is money,” he says. Delays are “a massive drag on our productivity and prosperity of this country”, he adds.

“We will build better, build greener but also build faster,” he says. Mr Johnson says he and Chancellor Rishi Sunak will “scythe” through red tape to get infrastructure projects built as well as helping to create “thousands of high paying jobs” by providing training and apprenticeships.

In response to Prime Minister Boris Johnson’s “New Deal” speech Chris Fletcher, Director of Policy at Greater Manchester Chamber, said: “Much of what the Prime Minister has laid out is to be welcomed and should act as a real boost to the economy with a mix of infrastructure projects and changes to the planning regime.

“The real test though will be of course how much and how quickly this gets delivered. With respect to the PM we have heard a lot of similar sentiment and ambitious statements over the years and in a lot of cases are still waiting for work to start – the Castlefield Corridor in Greater Manchester is a prime example.

“Businesses, workers and communities are facing desperate times and need immediate action not soundbites if the country is to stave off the looming economic impact caused by Coronavirus.

“We need to see strong active government, with no distractions, delivering the structure for recovery in a way we have not seen before, backed up by genuine active involvement from local leaders and communities who know better than anyone in Whitehall where the money should be spent and what projects are priority. Without this the PM’s proposed New Deal could turn into old hat.”

“Today’s speech is deeply disappointing for anyone who hoped that it might set out an ambitious programme of change to tackle our regional inequalities. In the face of the biggest challenge ever to face these islands, it merely reheats existing announcements and does little to ‘level up’ power and resources across the UK. The North deserves better.

“Given the economic crisis facing our regions, we need far more than rhetoric. We need ambition, investment and action at pace and scale to help people and communities who have been hit hardest by our regional divides, by austerity and by this pandemic. These divides haven’t happened by accident, but as a result of our uniquely centralised political system. It’s a system that has proven itself unsuitable to respond to crises. The Prime Minister completely failed to recognise this in his speech today.

“We need to build back better with more than just bricks and mortar. This is about our capacity to respond, to be resilient. To build a better future for our children. In the North that means building a stronger system of devolution. It means a sensible funding settlement for local government. It means creating new green jobs as part of a Plan for Nature in the North, and it means building decent health and education into all policies to secure an inclusive and productive future economy”.

“The economic impact of the global pandemic risks fracturing communities for a generation. Plans for a jobs-first recovery, underpinned by a restorative injection of infrastructure investment, could help limit the damage and set the UK on course to build back better.

“The Prime Minister’s commitment to upgrade and decarbonise our transport infrastructure, in all UK regions and nations, lays strong foundations. Upgrading and building new English schools, prisons and hospitals will mobilise the construction industry supporting millions of workers and job opportunities. And cutting red tape should help prioritise the building of widely available, truly affordable homes. Together with commitments on R&D and innovation, these are the first steps on the path to recovery.

“Foundations are there to be built on. More is needed to prevent the uneven scarring unemployment leaves on communities.

“Guaranteeing apprenticeships and in-work placements are a start. Details are needed now so providers are ready. Other ideas business would like to see include further wage support to protect jobs, a new jobs programme to create opportunities and more funding for future skills in high potential areas such as digital, low carbon and health.

“The reality is that longer-term plans will falter without continued help for firms still in desperate difficulty. Government intervention so far has saved countless jobs, yet anxious months for many still lie ahead. The focus on rescuing viable firms cannot slip while the UK looks to recovery, or earlier efforts could be wasted.”