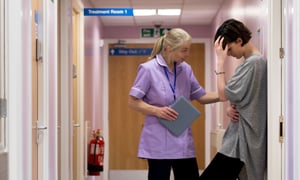 Mental health patients are at much greater risk of dying from unnatural causes following their first discharge from inpatient care than the rest of the population, according to new research.

In the most comprehensive study of this topic ever carried out, The University of Manchester team say though danger to patients is still relatively low, community services and GPs must be aware of the critical period in the first few weeks of discharge – when they are most at risk.

Though the report drew on data derived the entire population of Denmark, its results are relevant to the UK, which has a similar population and health system, say authors Professor Roger Webb and PhD student Florian Walter.

According to the team, the most common threat to life among patients after discharge is fatal poisoning compared to accidents among the general population.

The analysis compared over 1.6 million Danes with a subset of 47,000 people who were discharged from their first inpatient stay between 1982 and 1996.

Utilising national administrative datasets, the research team were able to track the group of patients, who averaged age 25 when they were discharged until they died or 31 December 2011.

They looked at method of suicide, types of accidental death, types of fatal poisoning and death by homicide.

Though there is a strong association between hospital discharge and unnatural death, there is no evidence of a causal link between the two, say the researchers.

According to the research, suicide was 32 times more likely after discharge: 171.7 people in every 100,000 died after leaving hospital, compared to 5.3 in every 100,000 for the general population

And death from fatal psychotropic drugs poisoning , irrespective of intent was over 90 times more likely: 25.6 people in every 100,000 after hospital discharge, compared to 0.2 in every 100,000 for the general population.

Professor Webb said: “When we look at detailed causes of death, each one is markedly raised whether that’s traffic accidents or poisoning.

“So it’s clear this group of people is more vulnerable to dying from a variety of different unnatural causes after discharge, although the risks for each of these causes are nonetheless relatively low in absolute terms.

”However, it’s important to point out hospital is not a cause of unnatural death as these patients are a young cohort already from high risk groups; therefore the risk of dying could be even higher without hospitalisation.”

Florian Walter said: “This is the first study to look at the full range unnatural causes of death among mental health patients after discharge from hospital ever carried out.

“The Danish system is ideal for this sort of research because Danes are given a unique identification number which provides data that are entered into several national registers.”

A previous study by Walter, published in JAMA Psychiatry in 2017, found that patients are most at risk in the first month after discharge.

He added: “The overarching message is that transition from hospital to community is riskier for these people, especially during the first few weeks after discharge.

“Therefore mental health services need to develop broad strategies that include enhanced post-discharge surveillance. These strategies must account for the fact that discharged patients have higher risks of dying unnaturally in lots of different ways.

“We also think better liaison between inpatient and community services is important so that services can be more vigilant about patients taking their medication correctly at the doses prescribed.”