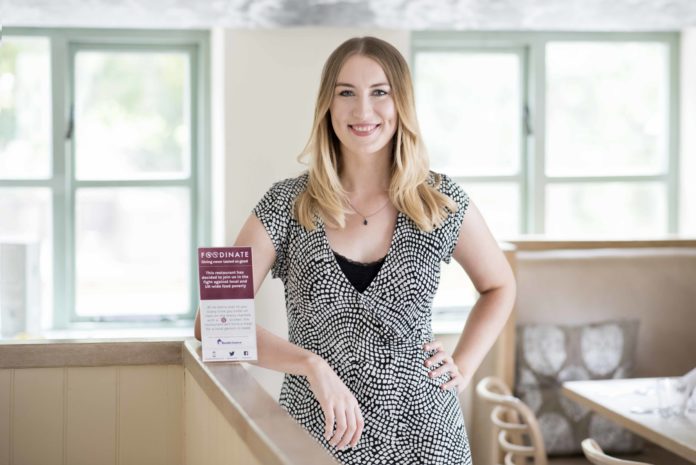 Since 2016, Manchester-born social enterprise Foodinate has partnered with restaurants and event venues to fight food poverty in the UK and bring hot, nourishing meals to people in need in deprived local communities.

Now, to celebrate reaching the milestone of providing a massive 100,000 meals to those most in need, Foodinate is launching their “Business Champions Club” membership packages in the hopes of fundraising an additional £100,000 to expand resources – and Manchester-based coding school Code Nation has signed up to help support and spread the word. The Spring Gardens based school is designating a “free” meeting space as a Foodinate venue, meaning businesses who want to use the meet up space will be able to donate to Foodinate if they have food during their event.

After celebrating reaching the 10,000 meal mark, Foodinate is now having an impact in 12 deprived communities across the UK. Having now won 10 awards for their social innovation and female-founded entrepreneurialism, they are already working with some giants in the industry including The Alchemist and GG Hospitality.

Co-owner of GG Hospitality and former Manchester United footballer, Gary Neville, signed up events and catering venture, GG Events & Catering, to Foodinate in 2018. The partnership ensures every person attending a private event at any of their venues, including Hotel Football and Manchester Cathedral results in a meal for a person in need in the local community through Foodinate.

Of their decision to sign-up to the programme, Neville said: “When we heard about the Foodinate scheme, we knew it was something we wanted our events and catering company to be involved with. Homelessness is a serious problem, so for our clients booking events through us to know they are making a positive difference in the city at the same time as holding their event, it’s a very special thing.”

Manchester-born Caroline Stevenson founded Foodinate at the age of 23, with little experience, contacts or money, but with a whole heap of passion and determination. Stevenson was recently named Inspirational Woman of the Year at the 2018 Enterprise Vision Awards for her work with Foodinate, saying of the new milestone “When I first started working on Foodinate, I dreamt about what it would feel like to reach milestones like this. Providing 100,000 hot, nourishing meals for some of the hardest to reach individuals, in some of the most deprived communities across the UK. I’m so proud of the team and will be forever grateful to our dedicated partners for believing in this idea and making it happen with us. Unfortunately, with more than 13 million people in the UK living below the poverty line, our work has only just begun, and we have huge plans to take our impact to new heights.”

One of those plans is to take Foodinate to large-scale venues and events, including stadiums, music festivals and large sporting events. Foodinate recently appointed Dan Schofield, who has previously held leadership roles at Manchester City & Manchester United Football Clubs, as well as the London 2012 Olympics and Tour de France, as new Non-Executive Director to help make this happen. Schofield, who is currently MD of Pioneer Venue Solutions, is very excited about Foodinate’s potential. When asked about the task at hand, he said: “As soon as I heard about Foodinate I knew I wanted to be involved and use my industry contacts to help Caroline and the team generate even more impact. Foodinate is such a simple but powerful message – for every person attending a “Foodinated” event, a meal is provided for a person in need in the same community that the event takes place. That message resonates with both Event Organisers and Event Attendees, and now with the launch of the Business Champions Club, Event Suppliers too, so it’s a win-win. I’m really excited to get Foodinate in to Stadiums and Events and continue the fantastic work that has been done to date.”

When speaking about the new membership offering, which they have named the “Business Champions” club, Stevenson said “Businesses in the community have really taken to Foodinate. It’s such a simple idea with such a powerful social impact, they’ve seen what we’ve been able to achieve so far and they want to be a part of it moving forward. We want them to be part of it, too. I’ve lost count of the number of amazing businesses that have approached us wanting to support our mission but couldn’t adopt our usual ‘eat a meal, give a meal’ model. The Foodinate Business Champions Club is about opening our doors to any business, in any industry, that wants to make a seriously positive difference in their communities and be a part of something amazing.”

Manchester mental health charity marks 30 years of making a difference to the lives...