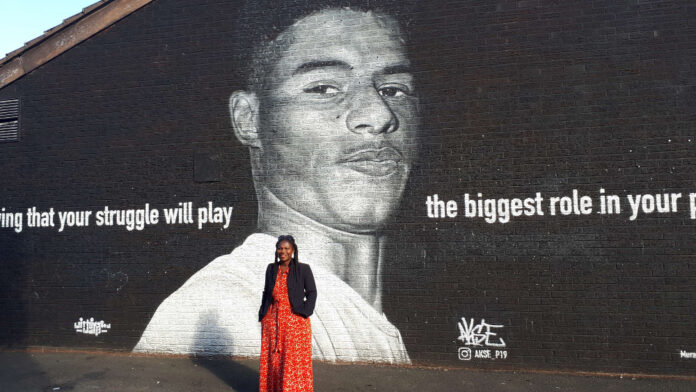 A Manchester mum was so disappointed with the racist abuse directed at three young England players after the team’s July European Championship loss that she decided to publish a children’s book and dedicate it to the trio.

Barrister at Law Sally Penni, who has previously authored a picture book with a diversity theme called Rosie and the Unicorn, has launched a black history book for children in response to the hatred directed at Rashford, Sancho and Saka.

Sally lives with husband and three dual heritage children not far from the Marcus Rashford mural in Withington, south Manchester, which this summer became a focus for an outpouring of love for the three young black players.

Called Where Are You From?, the fully illustrated work introduces 31 figures from black British history, one for each day of October, which is celebrated each year as Black History Month.

The majority of the people included in the book have a connection to the UK, and figures from the world of law are particularly well represented, reflecting Sally’s legal background. These include Jamaican barrister and magistrate Ena Collymore-Woodstock, John Anthony Roberts, the first QC of African origin, I. Stephanie Boyce, the current president of the Law Society and Dame Linda Dobbs DBE who was born in Sierra Leone and became the UK’s first black high court judge.

Not all the figures included in the book are black. Sally cites the plucky white female workers in the mills of nearby Rochdale, who steadfastly refused to handle slave grown cotton in the mid-19th century, amongst her own personal black history heroes.

Sally said: “The idea behind the book is that parents can use it to expand on what their children learn in school during Black History Month, reading about one historical figure each night of October. The book also gives schools a helping hand with widening the scope of their teaching.

“I have three children, aged from 7-11, and their lessons never seem to have moved on beyond introductions to Nelson Mandela and Rosa Parks, year after year.

“Whilst both are important figures, I want my children and others to have a better understanding of what black people have contributed to society here in the UK.

“The book is aimed at all children and adults and explains why black history is everyone’s history.

“I want children to realise that racism and prejudice are not just historical features of America’s and South Africa’s pasts.

“I hope the book will be a catalyst to talking about how racism still plays a significant part in black people’s experiences of living in the UK today.”

Where Are You From?, a book celebrating black history for children by Sally Penni is available from Amazon for £12.99

Lancashire Wildlife Trust & Standby team up for spring to promote ecotherapy projects for...