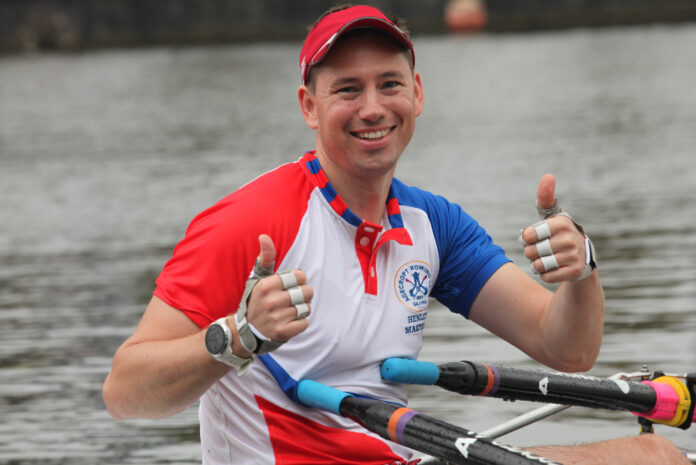 The Centurion Challenge saw Robbie, 40, row in various boat combinations up and down the River Irwell, clocking the equivalent distance of Salford Cathedral to York Minister.

Rowing the Centurion Challenge is no mean feat, a training Olympian would be unlikely to try this distance. The Agecroft Masters club member completed the last 2km of his challenge on a rowing machine surrounded by supporters in the Salford Quays club house.

Robbie, from South Manchester, joined a small group of men and women rowers across the country completing the Centurion Challenge to raise awareness of vital community projects, including #RowforChange.

Representing Salford and Manchester, Robbie’s challenge was organised to raise awareness about improving the diversity in rowing – with Agecroft RC striving to raise £30,000 to help get Manchester and Salford inner-city school children into the sport.

Speaking about the challenge, Robbie said: “It was an amazing day, so many people coming together to raise thousands of pounds to help open up rowing to kids in inner city schools. It was fantastic to row with each of Agecroft’s squads and have children up and down the river bank waving to us as we went up and down the Irwell. Thank you to all the people and businesses who have supported the event and the #rowforchange programme, the sore legs are nothing compared to the kind generosity.”

School rowing is often associated with fee-paying private schools, with young people from non-elite schooling backgrounds not being introduced to the sport until they are adults at university, if at all.

Keen to diversify the sport and get youngsters from schools across Salford and Manchester involved, Agecroft Rowing Club is trying to raising money to set up a youth programme and buy equipment.

A passion project for Robbie, he said: “Aged 13 I was fortunate enough to be introduced to rowing through my local school, with volunteer coaches who gave up thousands of hours of time to give children of any background the opportunity to take up the sport. Rowing has since been a major part of my life and I am forever grateful for that opportunity.”

He added: “Agecroft is really keen to make a difference to young people’s lives. We are looking for local businesses to get behind our diversity programme and support #Rowforchange through fundraising and sponsorship.”

Alongside the Centurion Challenge the Agecroft RC hosted a BBQ fundraiser, selling Agecroft Anniversary Gin from SIS4ERS Distillery and Agecroft Anniversary IPA from SEVEN BRO7HERS, who supported the club by running the bar. The Sunday Funday was attended by more than 200 people and has so far raised more than £5k towards the programme.

Agecroft Rowing Club offers opportunities for rowing at all levels and ages, from complete beginners to aspiring international athletes. The club’s high-performance coaching has seen a number of rowers represent Team GB at various international events. Most recently, Graeme Thomas was selected to race in the Men’s Double Sculls at the Tokyo Olympics, narrowly missing a medal.