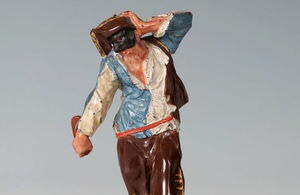 A temporary export bar has been placed on a rare Meissen Böttger stoneware figure.

The Commedia dell’arte figure is at risk of being exported from the UK unless a buyer can be found to match the asking price of £270,000.

Meissen is renowned across Europe as being the first true hard-paste porcelain factory in 18th century Europe. The rare, fragile and translucent porcelain imported from China and Japan was a source of wonder to kings, princes and aristocrats across Europe at the time, with many attempting to replicate these efforts. The production of hard-paste porcelain was preceded by the creation of a very fine high-fired earthenware.
This stoneware figure is an outstanding example, which demonstrates the cutting-edge technology of the time. It is one of an extremely rare group of models after the Italian Commedia dell’arte theatre, for which the factory at Meissen subsequently became famous.

The item was formerly owned by Emma Budge, a prominent Jewish art collector whose collection was sold at the Graupe Auction House in Berlin in 1937 following her death. The Nazis replaced the executors of her will with their own and the proceeds from the sale were paid into a blocked account. Emma’s heirs never received any of the money. The figure was eventually acquired by a prominent member of the Jewish community who escaped Nazi Germany in April 1938.