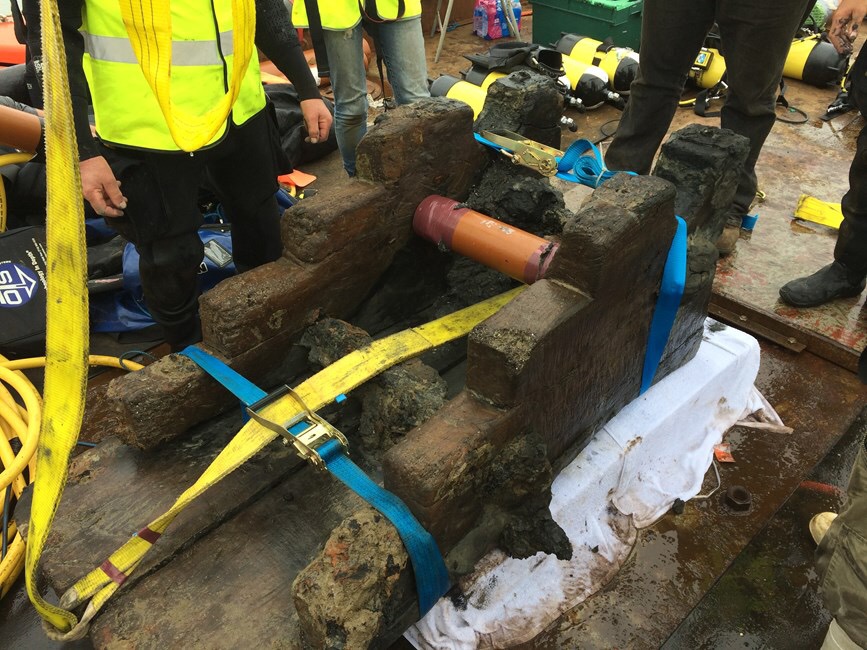 An incredibly rare and extremely well-preserved 350 year old wooden gun carriage was raised from the seabed yesterday to be brought ashore today by Historic England. It comes from one of England’s most important 17th century shipwrecks the London – which lies in two parts off Southend Pier in Essex.

The ship blew up in March 1665 after gunpowder stored in a magazine on board caught fire during a journey from Chatham to the Hope, near Gravesend in Kent. The ship was en route to collect final supplies after being mobilised to take part in the Second Anglo Dutch War of 1665-7.
The raising of the gun carriage is a pivotal moment in a two-year diving programme to discover and retrieve the warship’s artefacts before they disintegrate and are lost forever, in the Thames Estuary.

The waterlogged wooden gun carriage is estimated to weigh one ton (about the same weight as a rhinoceros). It was discovered by divers in pristine condition in sticky clay in the Thames Estuary late last summer, after being partly exposed following movement of seabed material. But over the past eight months, parts of the gun carriage have become more exposed and are at risk of breaking up due to strong currents and exposure to sea-worms. Climate change is bringing more of these destructive wood-boring sea worms into warmer English waters.

Alison James, Historic England Maritime Archaeologist, said: “This 350 year old gun carriage is in near-perfect condition but is a national treasure at risk. Unless we recover it quickly, it may break up and be lost.”

The gun carriage was lifted from 20 metres below the waves by Jumbo, a 20-ton crane barge normally used for mooring works, buoy maintenance and construction projects.

Licensed divers were in the water to help and the gun carriage was kept wrapped in wet blankets to preserve the fragile wood from drying out. It was brought ashore to Leigh-on-Sea in Essex and will be taken by road to York where it will be conserved over the next year by the York Archaeological Trust.

John Dillon, Project Manager at Cotswold Archaeology, said: “The successful lifting and conservation of this gun carriage will give us a great insight into the English Navy during an unsettled time when Britain was emerging as a global power. While the hull of the ship will remain on the seabed for the foreseeable future, the recovery and display of vulnerable artefacts such as this will aid our understanding of life on board a warship 350 years ago.”

Experienced Thames Estuary diver Steve Ellis, who has been granted the Government license to dive the wreck, said: “Being involved in guiding this rare piece of history to the surface was very special, the sort of experience every diver and maritime archaeologist dreams of!”

The London was built at Chatham Historic Dockyard in 1654-1656 during a time of great political upheaval after the English Civil War (1642-1648) and the First Anglo-Dutch War (1652-1654). She was one of only three completed Second Rate warships that were commissioned by Parliament between 1642 – 1660 and is the only one that survives.

The London played a significant role in British history as she formed part of an English convoy sent in 1660 to collect Charles II from the Netherlands and restore him to the throne, in an effort to end the anarchy which followed the death of Oliver Cromwell in 1658 and his son Richard Cromwell taking power.

Between 1660 and her dramatic sinking on 7 March 1665 – only three days after the declaration of the Second Anglo-Dutch War – the London was engaged in a range of activities protecting the Channel coast, as one of the key warships forming the backbone of the Restoration Navy. While this period fell between a series of wars with the Dutch, at this time the English Navy was attempting to take control of the seas to boost trade for English and allied merchants, and halt Dutch naval and merchant domination of trade routes.

At the time of her sinking, the London was one of only four English naval ships to have a full complement of 76 bronze cannons. Each gun carriage would have been unique because the London’s guns were not standardised and originated from different countries and different periods in naval history. By studying specific tool marks on the gun carriage, it will aid understanding of how they were made.

During the period, large guns were in short supply and were expensive to make, requiring significant amounts of bronze or iron and individual casting. As a result, captured guns from enemy vessels and guns from other wrecks or decommissioned ships were often used to help equip new warships such as the London. Because there were no two guns the same, it is believed that the wooden carriages were handmade by craftsmen in the dockyards for each gun when it was allocated to a ship. The carriages on the London were almost certainly made in Chatham Historic Shipyard, Kent.

A centenary celebration for Stonehenge