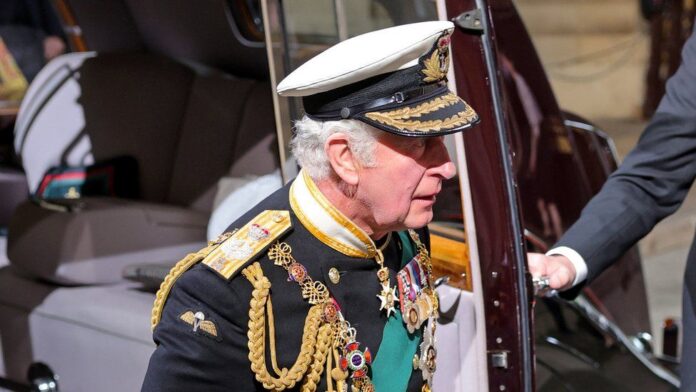 Prince Charles stood in for the Queen at the state opening of parliament after she pulled out with mobility issues.

It is the first time since 1963 that she has not fulfilled this role.

It plans to do so by giving mayors and council leaders the power to let out empty high street shops for residential use, in the hope it will rejuvenate town centres.

A Transport Bill ‘to modernise rail services and improve reliability for passengers’
and an Energy Security Bill – ‘to deliver the transition to cheaper, cleaner and more secure energy’

A Brexit Freedoms Bill promises that ‘regulations on businesses will be repealed and reformed’ and ‘a bill will enable law inherited from the European Union to be more easily amended’ and a Social Housing Regulation Bill – ‘to improve the regulation of social housing, to strengthen the rights of tenants and ensure better quality, safer homes

The Online Safety Bill is designed to deliver on a government pledge to better regulate content appearing on the internet,

It is the “most extensive” piece of legislation to be carried over from the last session of parliament.

Greater Manchester MP Angela Rayner asked what has happened to the Employment Bill promised by Ministers?

“Where is the action to tackle low wages and end fire and rehire in today’s Queen’s Speech?”

“Despite claims in today’s speech that easing the cost of living was a priority for this Government, there were no new support measures announced. This will be deeply worrying for families on low incomes, particularly those who have just experienced a real-terms cut to their benefits after the Government failed to uprate benefits in line with inflation last month.”

“Nevertheless, the inclusion of the long-awaited Renters Reform Bill and Social Housing Regulation Bill in today’s Queen Speech is very welcome. Together, these bills should help drive up standards and strengthen renters’ rights in both the private and social rented sectors. It is now essential that the Government works with renters to ensure the legislation is well designed and truly delivers, especially for those on low incomes.

“We remain seriously concerned that the Employment Bill, first announced in 2019, has once again not been prioritised by this Government. Ministers must explain why they have not committed to improving security and flexibility for low-paid workers when it would have boosted incomes and provided stability at a time when costs are soaring, and incomes are eroding.”

This Parliament must prioritise turning the levelling up rhetoric into reality. The agenda has stalled because of government’s inaction and is now under pressure from the soaring cost of living. We are already almost three years on from the 2019 Queen’s Speech which set out early promises. People need to feel the benefit of ambitious action with full accountability on this critical agenda.

“The Levelling Up and Regeneration Bill announced today included some welcome proposals including plans to help struggling high streets and better empower local people in planning decisions – but the government will need to be far bolder if it is to rewire power in England and narrow regional divides.

“We need an ambitious transfer of power from Whitehall to Town Halls through a fair, long-term devolution framework coupled with strong resourcing and accountability. Crucially, it isn’t enough for government to self-report on their own levelling up missions. So this Bill should establish, in statute, a new independent body outside of London to hold the whole of government to account against legally binding levelling up missions”.

‘Today’s Queen’s Speech reiterated the UK Government’s ambitions to level-up. But with a cost-of-living crisis and a huge backlog in NHS care, much bolder action is needed to secure the nation’s healthy recovery post-Covid.

‘Health Foundation research shows that at current rates, it will take 192 years to add 5 years to healthy life expectancy. Without urgent action on health risk factors and the social and economic determinants of health in the forthcoming health disparities white paper, this is unlikely to change.

‘Likewise, on social care, the reforms set out so far are a long way off ‘fixing social care’. More funding and reform will be needed to support the growing number of people going without the care they need, raise care quality, stabilise the provider market, and improve the pay and conditions of those working in the sector. Without this, social care will continue to fail people who need it.

‘After the Health and Care Bill, it’s welcome that there is no further legislative reform proposed for the NHS – but the government still has a role to play in ensuing the health service has the resources it needs over the long-term and urgently addressing workforce shortages.’

“Despite tackling patient backlogs being a priority in the Queen’s Speech, the Government missed the mark on speeding up and improving care for the 7.6 million people across the UK living with heart and circulatory conditions today.

“Right now, there over 300,000 people on waiting lists for time-critical heart care and treatments. The lack of a clear path to reduce the cardiac backlog is deeply concerning for heart patients and their loved ones. We urgently need a robust recovery plan for cardiac care, and a commitment to growing our NHS workforce who have done so much for so many.”