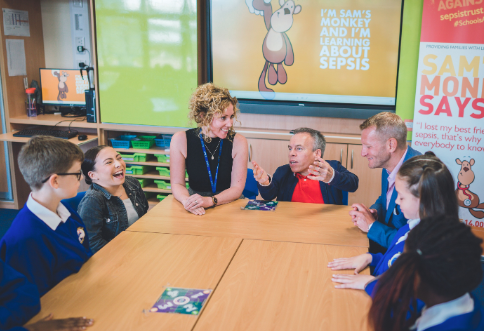 The Schools against Sepsis initiative, including lesson plans, animations and teaching resources, features simple information and child-friendly cartoons for Key Stage 2 teachers to lead lessons on sepsis, what it looks like and what to do if they recognise any symptoms. The video includes an introduction from Dr Ranj and animations narrated by Warwick Davis, featuring ‘Sam’s Monkey’ – a tribute to Sam Morrish, who lost his life to sepsis, aged three, in December 2010.

Sue Morrish, Sam’s mother said: “When Sam died, I had never heard of sepsis, so it’s crucial that people understand what the signs and symptoms are. Sam loved his monkey very much so it’s exciting to know that ‘monkey’ is now going to be helping children learn about sepsis in schools.The more people who know about sepsis, and know to ask ‘Could it be Sepsis?’, the more lives can be saved.”

Gill Mangnall, head of St James CE Primary Schools has overseen trials of the Schools against Sepsis lesson in her school. She said “The sepsis awareness lesson has been a huge success at St James. The children were engaged throughout and the whole class thoroughly enjoyed it, with lots of them asking if they could have more lessons on the subject!  They made posters about the symptoms to look out for and wanted to talk about it to other children in school. Raising awareness about sepsis and its symptoms amongst our pupils and their families could save a life by leading to early identification and treatment.”

According to the UK Sepsis Trust, sepsis affects more than 250,000 people in the UK every year, including 25,000 children. 52,000 people lose their lives to the condition every year in the UK – that’s 140 people every single day. UKST’s mission is to end preventable deaths from sepsis and, by their estimates, better awareness could save 14,000 lives every year.

Dr Ron Daniels, CEO of the UK Sepsis Trust,responsible for developing Schools against Sepsis in collaboration with the Iceland Foods Charitable Foundation, comments: “Sepsis strikes indiscriminately, affecting the young and old and the previously fit and healthy. It’s not enough for healthcare professionals to know about sepsis, we want everyone to be able to recognise the signs, including children, who are even more vulnerable.”

On the initiative, Dr Ranj said: “As a paediatrician, I’ve seen the devastating effects of sepsis on families. It’s great to be involved and be an ambassador for something so important, which stands to make a massive impact.”

Tarsem Dhaliwal, CEO of Iceland Foods and Trustee of IFCF, said “We’re thrilled to have played our part in the Schools against Sepsis campaign. It’s been fantastic working to raise awareness alongside UKST with our milk carton campaign and we’re confident that this new initiative will educate an unprecedented number of schoolchildren and their families about sepsis and the signs to look out for.”