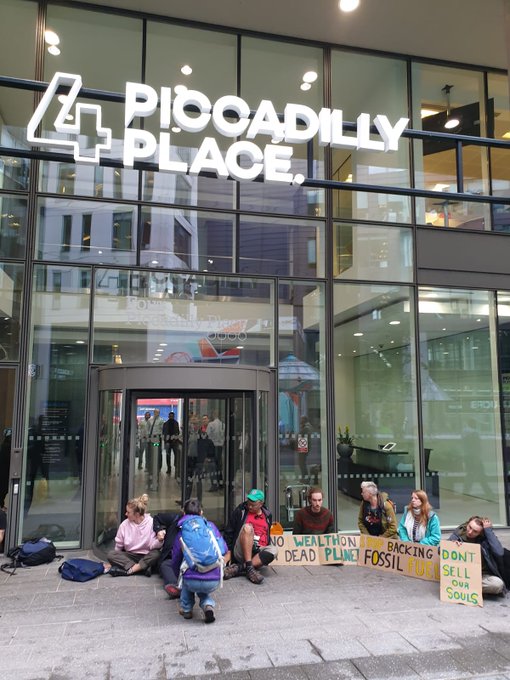 Six protesters from Extinction Rebellion have glued themselves to the pavement outside Barclays in Piccadilly Place to protest against the bank investment in fossil fuels.

The group have targeted the regional office of the Bank which they say has the highest investment in fossil fuels of any Bank in Europe.

In a separate demonstration, members of the group have marched from Deansgate and have arrived at Manchester Civil Justice Centre on Bridge Street. ⁦

The centre will hear the cases today of three protesters charged with contravening the Cuadrilla injunction at protest outside the site.The Court is due to pass sentence on the three.

Katrina Lawrie (41), Christopher Wilson (55) and Lee Walsh (44), who all lived at a camp near the site, locked themselves in arm tubes . They were all released by a specialist police team more than six hours later.

Cuadrilla has argued that they breached terms of an injunction granted almost a fortnight earlier, which prohibiting blocking the site entrance and conspiracy to disrupt the company’s operations. The company alleged Mr Walsh also breached the injunction at another protest. Miss Lawrie was accused of three more breaches, including trespass.

If found guilty, they face a maximum sentence of two years in prison.

On 28th June, the judge ruled that the three campaigners were guilty of contempt of court and that they had breached an injunction obtained by Cuadrilla to ban trespassers blocking access to the site in Little Plumpton.  The judge said the most severe penalty would be a suspended prison sentence.

It is the first time anyone has been convicted of breaching an injunction requested by an oil and gas company in the UK.

Two charged after assault in Moss Side at the weekend