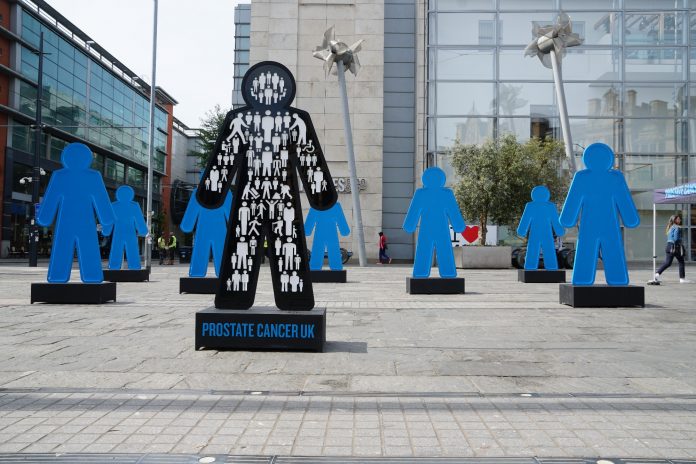 During National Walking Month this May the leading men’s health charity, Prostate Cancer UK, arrived in Manchester today with an installation featuring eight tall statues in a bid to raise awareness of the March for Men walking event taking place in June.

Standing two-metres tall, seven of the giant statues were coloured blue, while the eighth played voices of people with experiences of prostate cancer and replicated the charity’s iconic ‘man of men’ logo in black and white. This represented the shocking statistic that 1 in 8 men in the UK will get prostate cancer in their lifetime.

Passers-by could walk amongst the illuminated statues, and speak to local people affected by the disease and staff from the charity – which gave members of the public the opportunity to learn more about the UK’s third biggest cancer killer and how their support could help beat the disease.

Tony Collier, from Timperley, Altrincham, was at the event and will be taking part in the Manchester March for Men on Sunday 10th June. Tony was diagnosed with terminal prostate cancer when he was 60-years-old in May 2017.

Tony said: “I am a keen runner and last year completed the Comrades ultra-marathon in South Africa but experienced groin pain that wouldn’t go away. I decided to see a sports injury specialist and organised an MRI scan. My doctor put the pain down to osteoporosis, however the scan revealed a shadow on my pelvic bone so I was sent for a chest x-ray and range of blood tests, and the day after had an emergency scan. A few days after I was told I had terminal prostate cancer and was devastated.

“I will be taking part in the Manchester March for Men next month and hope that the money raised at the event goes towards a proper screening process. I would encourage other locals to come along to help raise awareness and learn more about prostate cancer.”

In line with Living Streets’ National Walking Month, Prostate Cancer UK aims to get more people walking through their March for Men series of events across seven UK cities this June. Taking place at Wythenshawe Park event on Sunday 10th June, the Manchester March for Men offers an optional 2k, 5k and 10k distance with everyone taking part receiving a t-shirt and medal.

Joe Irvin, Chief Executive at Living Streets said: “Walking is an easy way to get active, which is vitally important when it comes to looking after our health and wellbeing. A regular, short, brisk walk has many physical and mental health benefits, and for men living with prostate cancer, remaining active has been shown to combat some of the side effects of treatment. Many men tend to reduce their physical activity following a diagnosis, but walking offers a low impact way to stay active.

“We wish Prostate Cancer UK every success and hope that March for Men will raise the awareness and funds needed to beat the disease, as well as the health benefits of walking.”

Over 1,658 men are diagnosed with prostate cancer in Manchester each year, with over 317 men dying from the disease, and almost 14,121 living with and beyond prostate cancer.

James Beeby, Director of Fundraising at Prostate Cancer UK, said: “Our March for Men roadshow tour continues to gather momentum for the walking fundraisers taking place this June, and we’re delighted by the buzz created in Manchester today. We are beating the drum even louder across the UK this year as we mobilise legions of our supporters.

“One man dies every 45 minutes from prostate cancer, and it is now the third biggest cancer killer in the UK, ahead of breast cancer. More than 1,658 men are diagnosed with the disease in Manchester every year, but thanks to the support of those in the city, and across the UK, we can fund more ground-breaking research into better diagnosis and treatments, and help us to provide dedicated support and information to men and their families. We’ve got a way to go but these walks are the perfect way to take a step in the right direction.”

Those who signed up to the Manchester March for Men today are now in with a chance to win a £100 voucher to spend in Burton Menswear – who are charity partners with Prostate Cancer UK, and are showing their support by promoting the walking fundraiser with flyers, fitting room posters, and pin badges in store in Manchester Arndale.