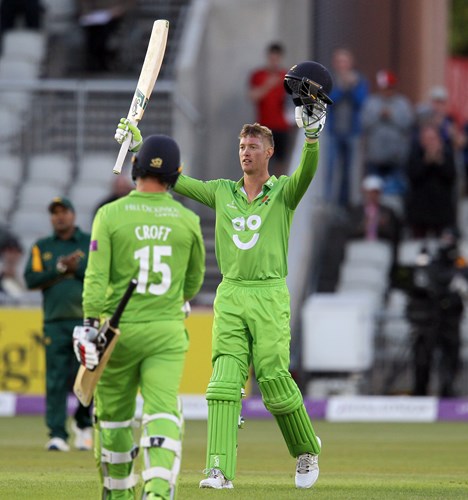 A fabulous century by Keaton Jennings took Lancashire very close to chasing down what would have been a record one-day run chase against Royal London Cup holders Nottinghamshire, but the visitors held on to prevail by nine runs in a thrilling contest at Emirates Old Trafford.

Jennings’ 136 was his fourth one-day century and his third hundred in his last three innings for Lancashire across four-day and one-day cricket. The left-hand opener had combined well with Liam Livingstone (33) in adding 70 for the second wicket and 63 for the third wicket with Dane Vilas who made 41. Steven Croft also contributed an excellent 33 in adding 85 runs in a fourth wicket partnership that looked like it might take the Red Rose through to their target.

To their credit the Nottinghamshire bowlers stuck to their task and once Jennings and Croft were parted on 245-4 in the 41stover with 74 runs needed from 56 balls, the visitors managed to keep things tight and apply the pressure that saw wickets fall steadily over the remaining overs. With Jennings there Lancashire were still in the hunt, but once his valiant 129-ball innings came to a close hitting out in the 47th over, Notts expertly closed the game out.