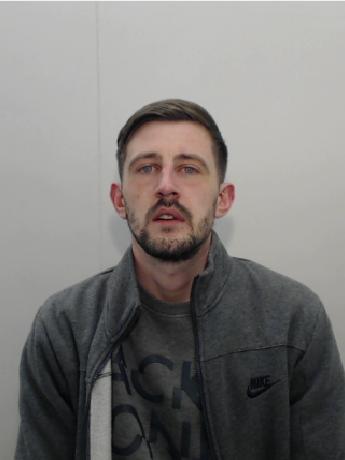 A prolific burglar has been jailed for eleven years in Manchester today after DNA from a glove pinned him to the crimes.

Lewis Smith aged 24 of Abbey Hey Lane was identified as the thief after part of his glove was ripped off during a fight with an elderly homeowner.

He was sentenced  at Manchester Crown Square today,after pleading guilty to four counts of burglary.

Smith carried out the four burglaries in a spree across Gorton and Openshaw in the early hours of Friday 8 June this year. The first took place around 4am on Hobart Street where he grabbed the keys to a Renault Clio before driving off in the stolen car.

Around an hour later, he forced a window of a home on Far Lane where he came face-to-face with a woman in her 80s who lived there. He demanded money before asking for her cash card and PIN number. The victim thought on her feet and gave him an old card and a fake PIN number before he fled, leaving him empty handed.

Just before 6am, a man in his 60s was asleep at his house on Cope Close when he woke up to someone kicking in his front door. Smith, once again, demanded money and a struggle took place between him and the victim. The victim fought back and managed to pull the finger tip off the black gloves Smith was wearing.

This was later recovered by Crime Scene Investigators and the DNA matched to Smith.

The final incident happened about 6.25am on Abbey Hey Lane. Again, he forced open a window before searching the property. A woman confronted him and shouted for her son who then chased him away.

Detective Constable Alexander Day, from GMP’s City of Manchester division, said: “Smith targeted people when they were at their most vulnerable in their homes.

“To be faced with an intruder in the early hours of the morning would have been extremely distressing.

“One of the victims had the courage to try and stop Smith and his bravery resulted in a key piece of evidence being recovered – the glove that identified him. While a woman in her 80s managed to trick him into believe he was getting away with a legitimate bank card.

“Thankfully no one was injured during these incidents but it doesn’t take away from how serious these offences were.

“Smith refused to answer any of our questions or assist with this investigation. But because of the overwhelming evidence against him he’s now locked up.”