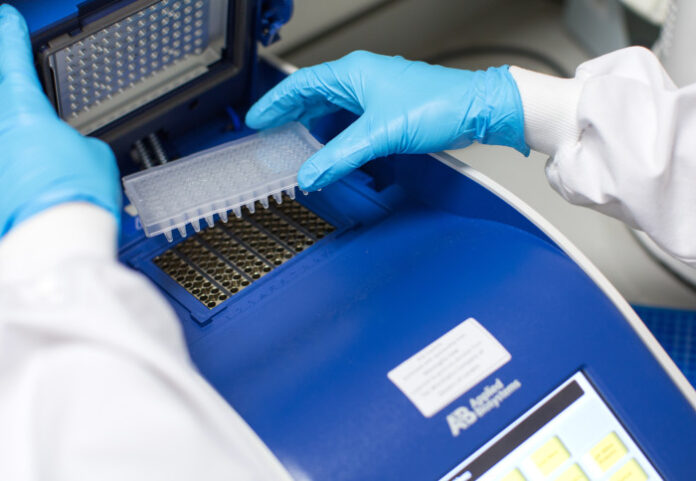 A major programme of community coronavirus testing that is tracking levels of infection in England has published its first report.

Tests on more than 120,000 people carried out between 1 May and 1 June, prior to the easing of lockdown, reveal that infection rates were significantly falling, dropping by half every 8 to 9 days.

Led by Imperial College London, the research found that during this period, on average around 1 in 1,000 people tested positive for the virus that causes COVID-19. Rates were found to be highest in care home workers, with 7 positive cases in 1,000. The researchers were also able to estimate the reproduction number (R) – the number of people that an infected individual will pass the virus onto – as 0.57, which is lower than previously reported.

The REACT programme, the biggest of its kind, is a series of studies that are monitoring how the virus is spreading across the country. Commissioned by the Department of Health and Social Care, it is being carried out in partnership with Imperial College Healthcare NHS Trust and Ipsos MORI.

The research is offering insight into infection rates broken down by geography, age, sex, ethnicity, key worker status and symptoms. This first report provides a baseline for further research as the programme continues over the coming months, which will be critical to understand the effectiveness of public health measures to control the epidemic and to inform ongoing strategies as the situation evolves.

Professor Paul Elliott, Director of the programme at Imperial, said: “Community testing is a vital step in ongoing efforts to mitigate the pandemic, but to be successful this must be based on robust scientific evidence and sound statistics. Through this surveillance programme with DHSC and Ipsos MORI we’re gathering the critical knowledge base necessary to underpin community testing and facilitate a greater understanding of the prevalence of COVID-19 in every corner of England.”

This study found care home staff and healthcare workers were more likely to be infected with the coronavirus during lockdown than the general population, at a time when the public was advised to stay at home and avoid all non-essential travel, therefore limiting opportunities for exposure. The odds of testing positive were almost 8 times higher for care workers, 5 times higher for healthcare workers, and almost twice as high for other key workers.

Those of Asian ethnicity were more likely to test positive than those of white ethnicity. The researchers therefore suggest that higher infection rates could have contributed towards the higher death rates observed in this ethnic group.

Anyone who had recent contact with a confirmed COVID-19 case was 24 times more likely to test positive than those with no such contacts, whereas the odds were 5 times greater in those who had been in contact with a suspected case.

Highest rates of infection were found in young adults, aged 18 to 24, while the lowest were observed in those aged 64 and above. There were no significant differences seen between males and females, different ethnic groups, regions and no evidence of geographic clustering was observed.

More than two-thirds (69%) of individuals who tested positive reported that they were symptom-free on the day of the test or the previous seven days. However, they may have developed symptoms later on and the study didn’t look at how infectious they might have been at this time. Of those who did report symptoms, a number were strongly associated with a positive test, including nausea and/or vomiting, diarrhoea, blocked nose, loss of smell, loss of taste, headache, chills and severe fatigue.

Health and Social Care Secretary Matt Hancock said: “This ambitious testing programme carried out by Imperial will help us better understand the spread of the virus to date, predict how it may spread in the future and inform our response to the pandemic.

“It shows the impact our national lockdown efforts have had and demonstrates that we lifted restrictions at the right time when infection was low.

“As a country we have made great strides towards beating this virus but we mustn’t take our foot off the pedal and such studies will form an integral piece of the puzzle as we continue to safely get life back to normal.”

Telecoms company dials up new base in Rochdale

“It had the grace of a giraffe among Hamsters” Councillors reject Northern Quarter Hotel...