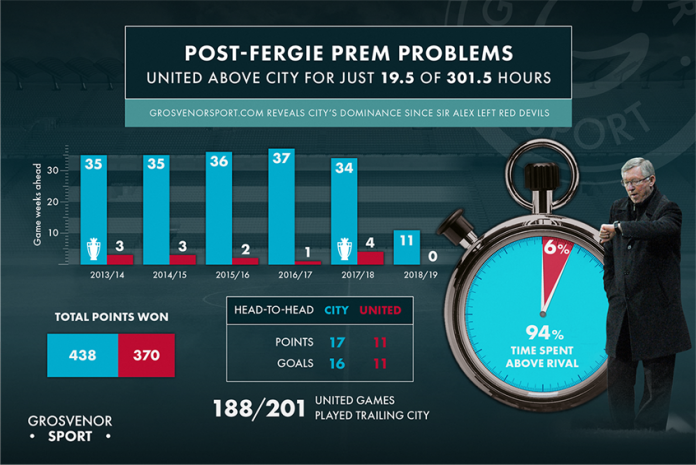 Since Sir Alex Ferguson retired as Manchester United manager, Manchester City have spent 16,920 minutes of Premier League action ahead of their bitter rivals, according to research by Grosvenorsport.com – the equivalent of 282 hours of football matches.

Ahead of the first Manchester derby of the season, the study has revealed the extent of City’s dominance over the Reds since ‘Fergie’ left Old Trafford at the end of the 2012-2013 season, which doesn’t make pretty reading for United fans.

During this time, there has been 301.5 hours of Premier League football played, with the Scotsman’s former club spending just 19.5 hours ahead of Man City in England’s top flight during that time – meaning they have only been above their ‘noisy neighbours’ for 6% of league action played.

Man City have been ahead of Man United for 188 games of the 201 played without their legendary boss in the dugout. Since then, David Moyes, Louis van Gaal and Jose Mourinho have all spent time chasing City sides managed by Manuel Pellegrini and most recently Pep Guardiola.

The Etihad side have also won five of the 10 league matches in the five seasons since Sir Alex’s departure compared to the three wins picked up by the Old Trafford outfit. The Citizens lead on goals scored in Fergie-less league derbies too – notching 16 compared to Man United’s 11.

City have finished ahead of United in the table in each of the last five seasons, with the biggest gap of 22 points coming in the first season without Sir Alex. In 2015/2016 the two sides finished level on points but City had superior goal difference.

Both sides are level on trophies won during the five seasons – City have lifted two Premier Leagues and three League Cup trophies, while United have won one FA Cup, one League Cup and one Europa League trophy.

Steve Munns, Head of Sport at Grosvenorsport.com, said: “While it’s well known that Man United have struggled since Sir Alex decided to call it a day, our research reveals just how much the tide has turned in Manchester – with the noisy neighbours now firmly in the Premier League driving seat.

“While derbies have been fairly close, the amount of time City have spent ahead of their bitter rivals in the Premier League is the most telling sign of dominance. In just over 300 hours of Premier League football, City have led Man United for 282 hours – 94% of league action played.

“They finished 19 points ahead of the Red Devils last season on their way to winning a Premier League and League Cup double and it’s hard to see past the Sky Blues for Sunday’s derby, for which they are 4/11 to continue to exert their dominance over United.”