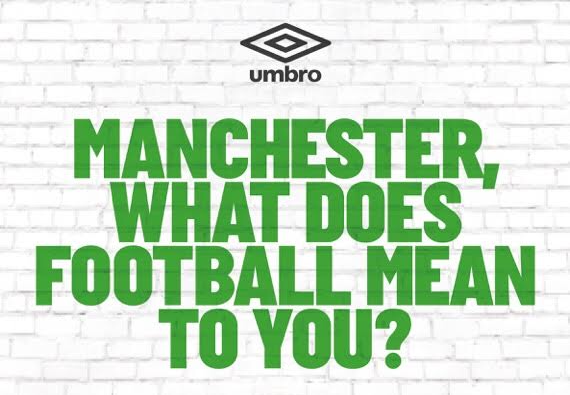 Umbro are asking Mancunians “What does football mean to you?” for a striking new piece of street art that the brand has commissioned to mark its 95th anniversary.

Founded in Manchester back in 1924 and still with its headquarters on Dale Street in the Northern Quarter, Umbro is calling its fellow Mancunians to share their opinions on social media using #UmbroManchester.

From non-league to Premier League, 5-a-side to futsal, on the pitch or off it, they want to hear thoughts on every aspect of the game. The best messages will appear on a 10m high mural, designed by local illustrator Tom Nicklin, for all the city to read.

Helene Hope, Umbro Head of Global Brand Marketing, said: “For 95 years, Umbro has been proud to call Manchester its home and from day one, football has been at the heart of the brand. Manchester is one of the greatest footballing cities in the world – so it is only right that our birthday celebrations kick-off here. Given that Mancunians are never shy of expressing an opinion, we’re expecting answers that truly reflect the relationship Manchester has with football.”

People have until 20th February to submit their tweets to be in with a chance for their words to be turned into a work of art for all of Manchester to see. The mural, to be located on the edge of the Northern Quarter, will be unveiled in April.

Teams are allowed to fail, but Manchester United have totally given up