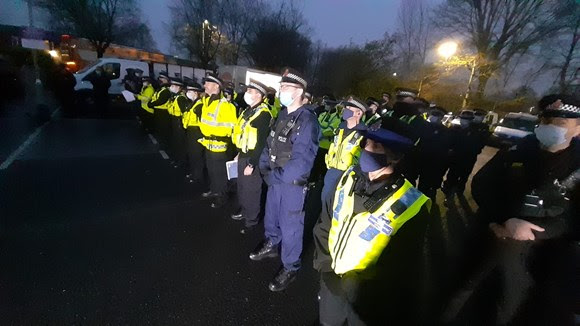 A total of 20 arrests were made throughout the day from 16 raids across Manchester, starting at 6am and carried out in areas including Levenshulme and Wythenshawe in south Manchester, and Harpurhey and Moston in the north.

The arrests made were for offences including possession with intent to supply drugs, possessing illegal weapons, with swords and a machete being located in a raid in north Manchester, domestic violence, burglary and driving offences. One stolen vehicle was also recovered.

At Broom Lane, Levenshulme, cocaine worth around £2,000 was found along with weapons and ammunition. A 36-year-old man was arrested on suspicion of possession with intent to supply class A drugs and possession of a prohibited article and released under investigation

At Lily Lane, Moston, a 24-year-old man was arrested was arrested on suspicion of possession with intent to supply class A and class B drugs and he was released under investigation. Officers seized cocaine and around £4,000 in cash.

At Waverley Road, Harpurhey, cannabis, nine phones and about £1,000 in cash was seized and a 22-year-old man was released under investigation after being arrested on suspicion of possession with intent to supply class B drugs.

As well as the raids, officers also held events within the local communities, such as stalls set up in supermarkets offering crime prevention advice and free home and personal safety equipment as well as bike marking.

Officers also visited the homes of previous burglary victims throughout the day, offering further advice to them on keeping their homes safe and offering reassurance and GMPs mounted unit patrolled Withington’s robbery hotspots.

Members of the press and partner agencies attended deployments to witness the surge activity for themselves.

Chief Superintendent Paul Savill, GMPs City of Manchester Commander, said: “It’s important that our communities are seeing us target these offenders and that criminals know that we will be locking them up no matter what time of the year it is.

“We had some excellent results yesterday and the day showed some great examples of our officers working together with partner agencies to tackle priority issues in the district.

“Those within the City of Manchester may continue to see a heightened level of police activity while our officers conduct further enquiries and we thank you for your patience during this process.”

A driver who struck down a grandfather as he went to buy food for...