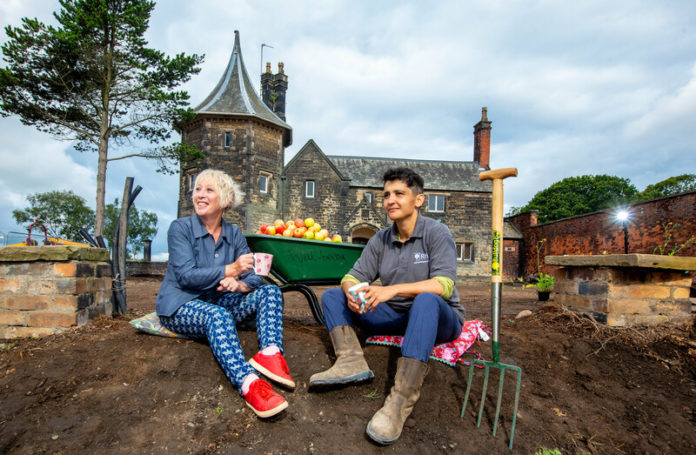 RHS Ambassadors Nick Knowles and Carol Klein today joined the RHS in a call to the public to help raise the final £4.8 million for RHS Garden Bridgewater, its fifth garden, in order to open the gates next summer.

The Royal Horticultural Society (RHS) launched the fundraising appeal as it announced the creation of a ‘Mother Orchard’ for the North West in the Salford garden. The latest of many spectacular gardens in the pipeline is a traditional orchard garden on a three-and-a-half-acre plot which will wrap around the original 1834 Garden Cottage.

Nick Knowles, RHS Ambassador, said: “At 154 acres, RHS Garden Bridgewater will bring a sizeable patch of world class horticulture to within an hour’s drive of 8.2m people in the region, delivering significant benefits to people and the environment. This heritage orchard, which will save rare varieties of pear and apple for future generations, is just one example. We want everyone to help us make this exciting project happen.”

The Orchard Garden, designed as a collaboration between Curator Marcus Chilton-Jones and local landscape architect firm Gillespies, will be the largest of the 11 gardens within the majestic eleven acre Weston Walled Garden, one of the biggest walled gardens in the country. It will be created on the site of the original orchard which existed at Worsley New Hall in the 1840s.

The garden will have a more naturalistic feel than the adjoining gardens, acting as a space to relax and unwind. Curator Marcus Chilton-Jones said: “The Orchard Garden comes at the end of the exciting journey our visitors will make through the Weston Walled Garden. They will have been amazed and inspired by all the world-class horticulture and then will reach this more traditional, relaxing space that helps to connect the intensive, cultivated horticulture with the wider countryside. It will be a garden that grows slowly and evolves, with new riches revealed each year.”

The orchard will feature a mix of apple, pear, plum, cherry and damson trees, as well as soft fruits, echoing traditional orchards with trees grouped naturalistically around the garden rather than in regimented rows. The mixed planting will encourage wildlife biodiversity and the old-fashioned rootstock selection will also add greatly to the lifespan of the trees.

It will include 37 varieties of heritage apple trees, keeping rare cultivars alive for future generations and becoming the first ‘mother orchard’ for the North West. The trees come from apples gathered from across Cheshire, Cumbria, Lancashire and the old Westmoreland. Varieties will include ‘Florence Bennet’, once saved from a Liverpool rubbish heap; ‘Withington Fillbasket’ from Cheshire, ‘Scarlet Tiffing’, popular in Lancashire and ‘Manx Codlin’ from the Isle of Man.

Carol Klein, RHS Ambassador, said: “One of the most important elements of RHS Garden Bridgewater is The Orchard Garden where endangered varieties, especially those local to the North West will be propagated and protected for future generations.”

The orchard will also include 14 varieties of heritage pear, first grown at Bridgewater over 170 years ago. When the RHS took over the garden in early 2017 the trees, which had been grown adjacent to the walls as restricted forms, had not been pruned for over a century, so had grown wild and sadly had to be felled. However, shoots from these trees have been carefully propagated to create healthy new trees, which will be re-introduced to the orchard and should last for around 200 years. Additionally, timber from the felled pears will be used to form the gnarled and twisted pillars of a new summer house, reflecting the heritage of the site.

Marcus adds: “The orchard will cast light on Victorian taste, as they give a glimpse of what was eaten in the area in the 1840s. The actual flavour and texture of many of these rare varieties is superb but they have gone out of fashion as the short shelf-life of the fruit makes them commercially unviable.”

The focal point of the garden will be the Garden Cottage, the distinctive Gothic-style cottage built for Worsley New Hall’s head gardener in 1834. The Cottage itself will be surrounded by bee and butterfly borders, designed in-house by horticulturist by Carolyn Collins, to provide year-round interest for pollinators. The plants, inspired by the RHS Plants for Pollinators scheme, will have a variety of shapes, forms and colours and will be planted in drifts to place emphasis on flow.

The Orchard Garden will be created within the Weston Walled Garden, a key part of the 154-acre RHS Garden Bridgewater. It will sit alongside a Wellbeing Garden, a Kitchen Garden designed by RHS Chelsea Flower Show gold medallists Charlotte Harris and Hugo Bugg; a Paradise Garden designed by Tom Stuart-Smith; a Learning Garden designed by students from Manchester Metropolitan University and community teaching allotments.

Carol Klein, RHS Ambassador, said: “RHS Bridgewater is a dream come true not just for the UK but especially for the North West. It’s a vital project for the advancement of horticulture, for local employment and to engage local communities in gardening. So good for body, soul and spirit. That’s why it’s imperative to do whatever we can to help the RHS bring it to life.”

Donations to the garden will help to create hundreds of jobs, from tree surgeons to therapists, as well as apprenticeships and learning opportunities, with up to 7000 local school children set to benefit free-of-charge each year from having this abundant, green resource on their doorstep. More info on supporting the project donating to the project can be found on the RHS website at www.rhs.org.uk.