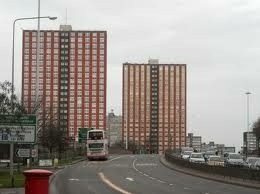 Plans for an open air theatre at Pendleton are to be unveiled at Salford’s Weekender, with a little help from famous Salfordians such as John Cooper Clarke, Ryan Giggs, Tony Wilson and Shelagh Delaney.

Young actors, shop keepers and local residents have been working with Pendleton Together, the consortium regenerating the area, on plans for a new theatre square on Liverpool Street.

Work on the square, outside Salford Arts Theatre, will start this summer after the people behind the scheme decided to take a very different approach to public consultation.

“We decided that the best way to find out how the space works was to use it – so we invited young actors from Salford Arts Theatre to perform on the site,” said Paul Longshaw, programmes director for sustainable regeneration.

“They explored roles played by Salford actors Ben Kingsley, Albert Finney, Robert Powell and Christopher Eccleston and gave us their feedback on how the space should work.

“Developing the theme further, we asked local artists Amber Sanchez and Ross McCormack to work with local residents and traders and they came up with the idea of inviting them to dress up as famous Salfordians and pose in the square while giving us their ideas.

“We called in one day to ask how the consultation was going on and someone commented ‘We’ve had the shop traders Cooper Clarking all day.’

“So even before it opens, we can say our new theatre square has been ‘visited’ by Tony Wilson, Winston Churchill as played by Albert Finney, Shelagh Delaney, Ryan Giggs, The Ting Tings, Ewan MacColl, Freddy “Parrot-face” Davies and John Cooper-Clarke.

“The site used to be the Brass Tally pub and we found out from the consultation that a local regular, nicknamed Wobbly Walt, used to win dancing contests there even though he never actually entered the competitions! We’re now working on including a fitting tribute to Walt and his dancing in the square.”

Photographs of the consultation and plans for the square will be on show at Salford’s Weekender which takes place at Swinton Civic Centre on Saturday 31 May and Sunday 1 June.