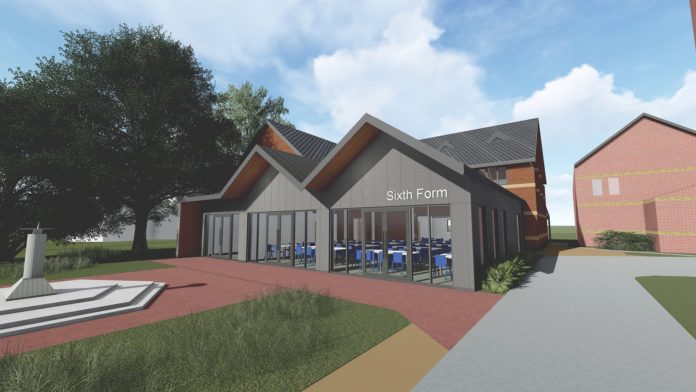 A landmark £1.2million project which will see a brand new sixth form centre built for Cheadle Hulme School has been granted planning permission.

The development will mark the first time in the independent school’s 163-year history that sixth formers will have their own dedicated building where they can study and socialise.

Designed by Pozzoni Architecture, the ground floor of the new two-storey centre will consist of two main spaces, a café and a sizable common room. Upstairs will feature a large independent learning area, two separate spaces for small group working, a silent study room and a meeting room. A covered outdoor seating area will also provide an additional social space for the warmer months. The entire building will be fully accessible for wheelchair users.

Upper and lower sixth formers will share the building’s various spaces, encouraging mixing across the two year groups and helping to create cohesion.

Nick Axon, head of Cheadle Hulme School’s sixth form, said: “Sixth form at Cheadle Hulme School is all about preparing our students for university and the world of work. Our new building will provide them with the space they need to develop their independent working skills, as well as facilitating collaborative and project work.

“We believe our new dedicated centre will significantly add to the school’s 16-18 experience, which is of course one of the most formative times in a young person’s life. Our sixth form students follow a dynamic pathways curriculum, which incorporates external speakers, academic extension and enrichment, careers guidance and work experience placements, and we are now able to provide the facilities that match our high standard of our academic and pastoral provision.”

Catherine Mulley, director at Pozzoni and head of the practice’s education team, said: “We’re delighted to have secured planning permission for this project that will be such an important asset for Cheadle Hulme School’s sixth formers of the future.

“Giving the students their own dedicated space with multiple study and social areas will help to foster a feeling of independence and give them the freedom to study in environments that best suit their needs. We’re looking forward to work starting on site and seeing the project come to life.”

With construction commencing in January 2019, the eight-month works programme will involve a complete transformation of an existing property on the school’s 83 acres of grounds with work expected to complete in September 2019.