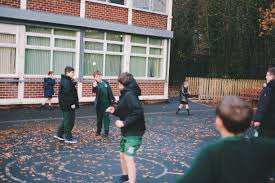 A new pilot scheme which aims to boost air quality in school playgrounds located next to major roads is set to launch in Manchester.

Scientists from Lancaster University have designed a programme which they believe has the potential to transform national policy, by demonstrating how evergreen hedges can be used as a natural shield to reduce the impact of traffic pollution on pupils.

The “Protecting Playgrounds” project – which will be delivered by Groundwork, with funding from Manchester City Council and Transport for Greater Manchester – will produce results which could benefit other schools in Manchester and beyond.

The four schools selected to take part in the initial trial currently only have railings or mesh fencing between their playgrounds and an adjacent main road.  Research has shown that evergreen hedges planted along the fenceline act as a natural filter, absorbing some of the particulate air pollution generated by passing traffic.  The project will test the use of instant hedges with different species, density and leaf shape, in a bid to identify the most effective green barrier for school boundaries.

During the trial – which is set to begin this summer and run into the autumn – pollution levels will be monitored in both playgrounds and classrooms, to observe what reduction in air pollution levels the hedges help to achieve.

The four selected schools are all located close to main arterial routes within the Greater Manchester Air Quality Management Area (AQMA), which illustrates the most polluted areas of the city.  Monitoring equipment has already been installed at the participating schools, which are: –

Barbara Maher, Professor of Environmental Science at Lancaster University, said: “This project has the potential to deliver some of the most ground-breaking and important evidence delivered to date in recognising the importance and value that green infrastructure can play in terms of reducing airborne pollution. It could quite literally be a lifesaver for the children of Manchester and of this country”.

Ruth Vayro, Headteacher of St Ambrose RC Primary, said: “‘The St Ambrose school community is delighted to be involved in this ground breaking research. The pupils have campaigned relentlessly over the last two years about the poor air quality they are faced with on the doorstep to school. Although this measure does not address the wider issue of poor air quality close to main roads in Manchester, it is likely to significantly reduce the immediate risks to health as the children play outside.’