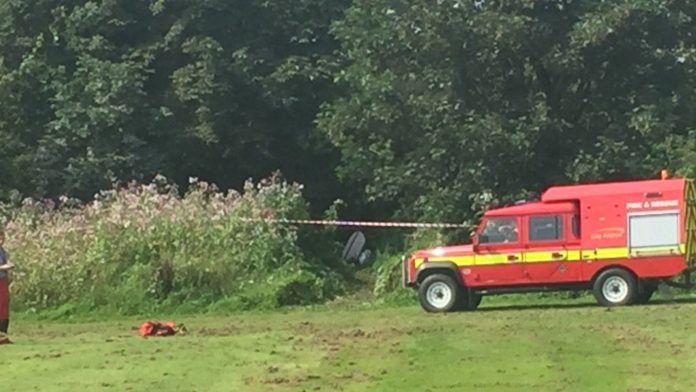 A pilot who overloaded a plane before it crashed with three passengers inside at Barton airport has today been convicted.

The pilot,Robert Murgatroyd aged 52 of Windy Harbour Road, Poulton-le-Fylde – had charged three men £500 each to take them to see a rare bird off the Island of Barra in his Piper PA28 aircraf back in September 2017.

But the men never reached their destination after the plane crashed shortly after take-off on farmland, injuring two of the passengers.

The incident sparked a joint investigation between GMP and the UK Civil Aviation Authority and enquiries revealed that the aircraft was 420lbs over its maximum weight.

Officers also uncovered that although Murgatroyd held a private pilot’s licence, he was not allowed to run commercial flights and this in turn rendered his insurance void.The flight manual was also not specific to that particular aircraft.

He is due to be sentenced on Friday 15 March .

Sergeant Lee Westhead, senior investigation officer from GMP’s Serious Collision Investigation Unit, said: “Murgatroyd is a selfish and greedy man who put his profit above the safety of his passengers and those on the ground, including people using the M62.

“He knew the risks and went ahead and took them anyway – his arrogance knows no bounds.

“It is fortunate that no one lost their lives during this dangerous airmanship and he is a disgrace to law-abiding aviators who do everything they can to ensure passenger and public safety.

“The Serious Collision Investigation Unit will not hesitate to work with partners to ensure those who break the law, and risk the lives of others, are investigated and brought to justice. Although aviation investigations are rare, they are not immune from police.

“I’d like to thank witnesses who came forward to help with evidence, PC Suzanne Keenan, and Simon Pollock and Anthony McKeown from the CAA’s Investigation Enforcement Team, as well as prosecuting barrister Henry Blackshaw – without them today’s judgement would not have been possible.”

Two members of a Salford organised crime group have been sentenced for conspiracy to...