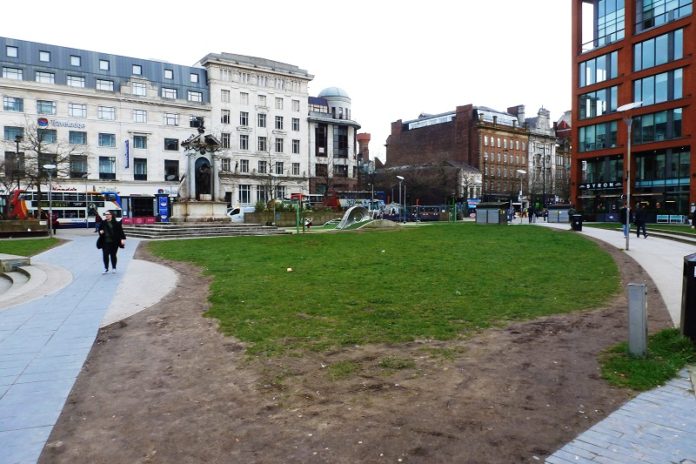 Those people who were waiting for the day when that infamous wall at Piccadilly Gardens would be demolished have had their hopes dashed.

Plans submitted eighteen months ago by Legal and General will no longer be going ahead after the Company agreed with Manchester City Council to withdraw its planning application for its proposed Piccadilly Gardens scheme.

Instead Manchester City Council is promising to commission landscape architects to draw up designs for improvements to the whole Piccadilly Gardens area.

A recent survey of city centre residents, workers and visitors gave a largely positive picture but by far the biggest negative public realm issue cited was perceptions of Piccadilly Gardens and lack of progress with plans for improvement says the council.

The Gardens are owned by the Council, Legal and General have a 250-year lease on the Pavilion and will continue to work in close collaboration with the Council to deliver improvements to the Pavilion.

Since the planning application was submitted in 2017, the original scheme has become financially unviable for Legal & General without significantly redefining its scope and brief.

Sir Richard Leese, Leader of Manchester City Council, said: “We know that people have strong views about the need for improvements to Piccadilly Gardens. Indeed after begging the Gardens was the issue which was most raised in last year’s city centre review.

“We are determined to deliver those changes. While the scheme which was previously envisaged has not proved possible in its current form, it is not a case of back to square one. The work which was done on that scheme, and the public consultation which established broad support for the principles behind it, will help shape the revised scheme and give us a sound basis to move forwards.”

Mark Russell, Senior Fund Manager at Legal & General said: “We are pleased that Manchester City Council will be bringing forward proposals that build upon our own ambitions for Piccadilly Gardens, and which will enhance the public realm. Legal & General will continue to work in close collaboration with the Council to deliver complementary improvements to the Pavilion, further adding to the existing amenity of the space.”