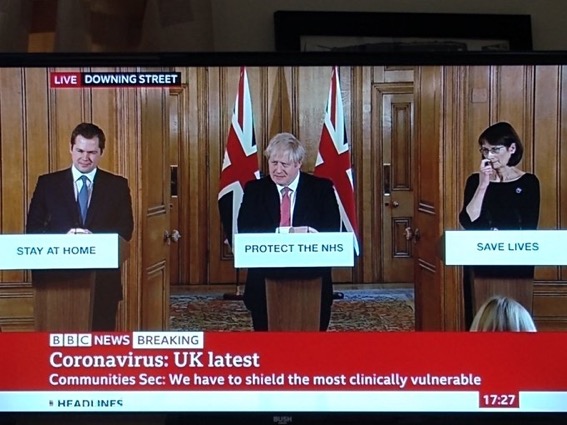 He wanted to emulate his hero Winston Churchill but history may remember him as Neville Chamberlain who was famously told by Parliament to go now as Hitler launched his Blitzkrieg across Europe in May 1940.

Like Chamberlain, many are now wondering whether Boris also missed the boat in his dithering response to Coronavirus sweeping across Europe and the rest of the world.

Yesterday’s fascinating piece in the Sunday Times by Tim Shipman and Caroline Wheeler, wset out the frantic and sometimes fumbling decisions taken inside No. 10 these past few weeks.

It alleged that Boris Johnson’s chief aide Dominic Cummings was a leading proponent of an ill-fated “herd immunity” strategy, which scientists eventually concluded would lead to 250,000 deaths.

Then over last weekend, Cummings changed his mind and became a vocal proponent of a serious lockdown to try to suppress the virus.

No 10 has issued a statement denying all, we probably won’t know the truth until the memoirs are written but there is no doubt that Johnson went missing, as he did while the country was battered by storms in February.

His daily press conferences are painful experiences, totally outflanked by his Chancellor on the two occasions in which they shared the stage and giving somewhat confusing and reactive messages.

“We cannot mince our words here,” If the story … in the [Sunday] Times is true — then Downing Street are guilty of gross negligence … The prime minister has been blasé about this from the start, waiting for others to make decisions so he doesn’t have to. It is costing lives! Enough is enough. The NHS cannot cope and it won’t be long before doctors have to choose between who lives and who dies.”

Danny Moran: Does the council’s Planning Committee do rehearsals?