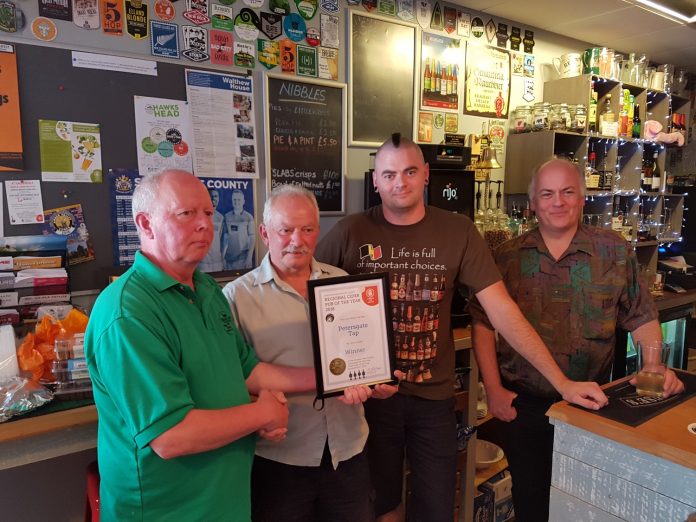 Stockport’s modern take on a pub has scooped the title of Greater Manchester’s Cider Pub of the Year.

Opened in September 2016 on the site of a former betting shop, the Petersgate Tap has attracted rave reviews for its innovative range of traditionally-produced ciders alongside a stunning selection of beers and speciality gins. It was nominated by the local Stockport and South Manchester Campaign for Real Ale (CAMRA) branch for the first time. But despite a challenge from six of the best cider outlets across the region, an expert team of judges marked Petersgate Tap the Greater Manchester winner.

Although real ale takes pride of place on the bar with six handpumps, father and son Alan and Chris Gent were also determined to provide cider and perry drinkers with an excellent choice from the off. They dispense traditional favourites from award-winning producers with a choice of cellar or fridge cooling. Recent offerings include a pair of national gold medal winners from Somerset, Scrummage Cider from Harry’s and Nempnett’s Piglets Perry.

Alan, a long-time CAMRA member said: “Although we’ve won a couple of awards from the local branch, this is our first regional recognition. As well as national winning ciders and perrys from traditional orchards, we’re keen to champion local producers such as Dunham Press and have its organic Dabinett available at present.

“We’ve worked hard to gain a reputation for our ciders and perrys, and are proud to win this title.”

The Petersgate Tap has an active programme of events with accoustic bands, poetry evenings and takes part in Stockport’s Foodie Friday each month. Its commitment to cider is next on show as part of the forthcoming Stockport Beer Week. Charlotte Bulmer will be leading a tutored tasting of nine ciders and perrys on Sunday 30th September.

CAMRA’s regional cider coordinator Mike Gilroy said: “I’m delighted to see a new winner. This award recognises and rewards excellence in promoting and serving our traditional drinks, and encourages others to aim for high standards.

“Our judges were impressed with the welcoming environment, value for money and the quality of the cider on offer. Many mentioned the knowledge of bar staff about the ciders and perrys sold at the Tap, and the encouragement to try unfamiliar products.”

The pub now goes forward to the next round of the competition, with the national Cider Pub of the Year expected to be announced in early October.