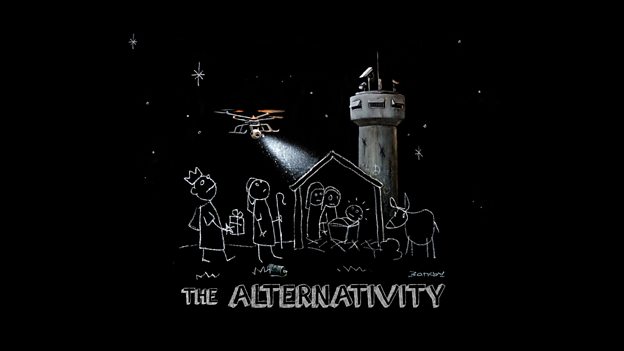 Coming to TV screens on Sunday 17 December, 9pm, Radcliffe’s very own Danny Boyle travels to Bethlehem to capture a festive performance of the nativity quite unlike any other.

The Alternativity, an hour long  unique observational arts and documentary commission for BBC Two is staged in the carpark of his hotel around the corner from Manger Square, Bethlehem.

In March this year, graffiti artist Banksy opened The Walled Off Hotel in the little town of Bethlehem – a place under Israeli occupation, overlooked by a vast security wall and with checkpoints controlling the roads in and out.

Now, in a bid to bring some festive cheer to what Banksy calls “the least Christmassy place on earth”, the artist has decided to stage an Alternativity – believed to be the birthplace of Christ himself. But as a famously anonymous graffiti artist who has never put on a play, he is going to need some help – and who better than celebrated Oscar-winning film director and maestro behind the London 2012 Olympic opening ceremony, Danny Boyle?

Accepting this unorthodox request from a man he has never met, Danny admits the closest he has ever been to the Middle East is a fortnight in Majorca. Thrown in at the deep end, he travels to the occupied Palestinian territories to create a spectacular show from scratch.

Shot over six weeks, this enthralling documentary follows the action as Danny overcomes the many restrictions to assemble a cast and crew, meeting local children, theatrical performers and a great many donkeys along the way.

How will Danny tell the story of the most famous journey ever made – in a land where movement is severely restricted? Will he find a donkey? And, as if the challenge wasn’t big enough already, can he fulfil Banksy’s request to make it snow?

Patrick Holland, Controller BBC Two, says: “It is brilliant for BBC Two to be working with Danny Boyle, Banksy and the creative team who together are making this alternative nativity. It promises to be a challenging and provocative exploration of a story of that speaks to young and old alike.”