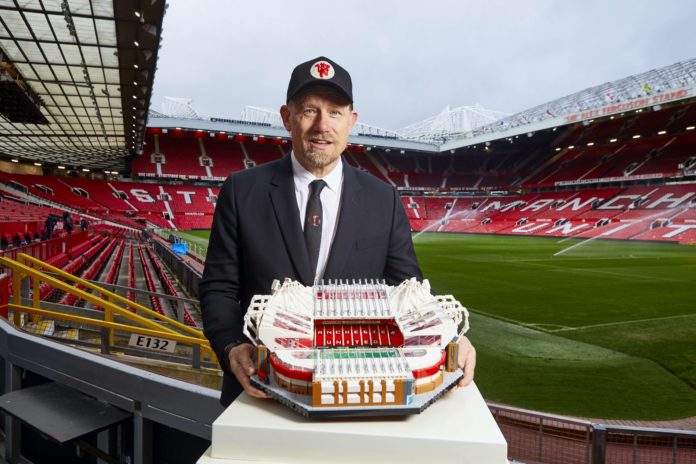 Peter Schmeichel, the legendary Danish goalkeeper, has appeared in a video from the LEGO Group and Manchester United Football Club.

The video is to celebrate the 110th anniversary of Old Trafford (February 19th) – in which Schmeichel can be seen securely transporting a new LEGO Creator Expert Old Trafford set from Denmark back to its home turf at the iconic stadium.

A five-time Premier League winner with Manchester United and part of the club’s heroic treble-winning team during the 1998-99 season, Peter Schmeichel can be seen in the video accepting a special mission on behalf of the LEGO Group – carrying the set from the Danish company’s HQ overseas and delivering it safe and sound to a pitchside podium at the ‘Theatre of Dreams’, whilst also dropping off 1998 other sets to the LEGO Store, Manchester.

Peter Schmeichel will also be making an appearance at the LEGO Store Manchester, in the Manchester Arndale, from 17:00 – 19:00 on March 6th, to meet Manchester United and LEGO brick fans alike and sign their new LEGO Creator Expert Old Trafford sets in person with LEGO designer, Michael Psiaki.

“The LEGO Group is a beloved part of Denmark and my childhood, so to be able to mark the 110th anniversary of Old Trafford, a stadium so close to my heart, in a way that brings these two global icons together was an opportunity I could not miss. I hope fans around the world enjoy the footage of my special mission – and I can’t wait to meet many of you at the LEGO Store in Manchester.”

The first game at Old Trafford was held on 19th February 1910 – an FA Cup Final replay between Bradford City and Newcastle United, in which Bradford won 1-0. That first game was played to a crowd of 45,000 fans – and in 2020, Old Trafford is now the largest club ground in the United Kingdom, with a capacity of 75,000.

The 3,898-piece LEGO Creator Expert Old Trafford model is a spectacular tribute to one of football’s most iconic stadiums – with the 1:600 replica model featuring several authentic details including the United Trinity statue and the Munich memorial clock.

Raft of Sports Stars to Feature at The Manchester Sporting Club