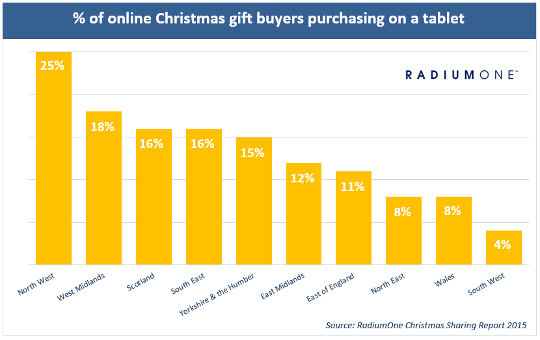 People in the North-West will spend £2.93 billion on Christmas presents, buying 87.2 million gifts for the big day.
According to new research from marketing technology experts RadiumOne, those in the North-West will spend more money (£510.14) on more presents (buying 15.2) for more people (8.9) compared to the average across Britain (£489.04 on 14.8 presents for 8.3 people). The 8.9 people on their Christmas shopping list is the most in Britain – along with people in the East Midlands and East of England.
Clothes (59%), entertainment gifts (54%), and toys (48%) will be the North-West’s most popular gifts purchased.

When it comes to gift-buying, the vast majority of people in the North-West intend to avoid the high street altogether. Among those who know how they’ll buy their Christmas gifts, less than one in seven (13%) will do both their research and shopping in-store.

The most popular method of shopping is to do both research and buying online (43%).

Nearly two in five (37%) are still to decide whether to do their gift research and shopping online or on the high street, with deals (77%), convenience (56%) and time (40%) the biggest deciding factors. Deals are a bigger factor in the North-West than any other region.

Online Christmas shoppers in the North-West are the most likely (25%), by far, to use a tablet to buy gifts – ahead of the West Midlands (18%) – and twice as likely to do so as the average Briton (13%).

However, people in the North-West are much less likely (10%) than the average Briton (17%) to use a mobile phone to buy gifts. Desktop computers remain the region’s most popular device (69%) to buy gifts. Just under one in seven (13%) will use at least two devices to buy gifts.

“Christmas is, by far, the biggest sharing event of the year and technology has added considerable fuel to the fire, particularly by tablets in the North-West,” says Rupert Staines, RadiumOne’s European Managing Director. “The internet and connected devices have made it much easier for people to research and buy gifts. Thus, it’s a major factor in the large amount being spent on presents across such a wide set of people.”

Couple in 70’s attacked in their Rochdale home