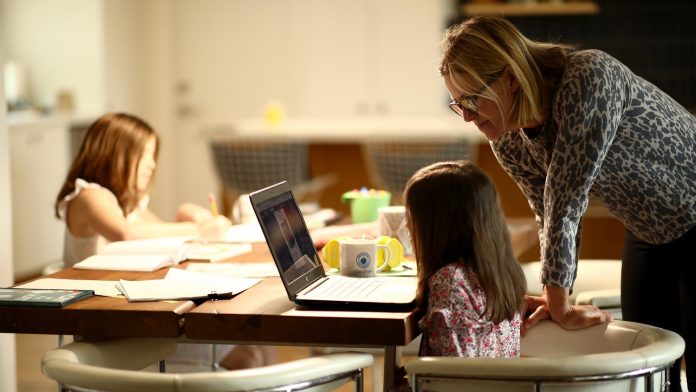 School closures, massive rates of job loss and furloughing, and a shift to working from home are all affecting how parents spend their time, and how mothers and fathers divide responsibilities for paid work, housework and childcare.Researchers from Insitute for Fiscal Studies and the UCL Institute of Education have specially designed an online survey, funded by the Nuffield Foundation and fielded between 29 April and 15 May, to capture how 3,500 families with two opposite-gender parents are sharing paid work and domestic responsibilities.

The responses reveal that Mothers are more likely than fathers to have left paid work since February and that among mothers and fathers who are still in paid work, mothers have seen a bigger proportional reduction in hours of work than fathers.

Among those doing paid work at home, mothers are more likely than fathers to be spending their work hours simultaneously trying to care for children.

The combined effect is that in lockdown, mothers in two-parent households are only doing, on average, a third of the uninterrupted paid-work hours of fathers. Before lockdown, mothers did around 60% of the uninterrupted work hours of fathers. This sharp reduction in the time that mothers are spending dedicated to paid work risks lasting harm to their careers when the lockdown is lifted.

The survey also reveals the extent to which mothers have picked up the bulk of the time spent on new responsibilities for childcare and housework: they are looking after children during an average of 10.3 hours of the day (2.3 hours more than fathers), and are doing housework during 1.7 more hours than fathers. However, fathers have also increased the time they spend on housework and childcare: fathers are, on average, now doing childcare during nearly twice as many hours as in 2014–15. This means that fathers are now taking on a greater share of household responsibilities than they were before the crisis.

Mothers who are still doing paid work have reduced their paid working hours substantially and by more than fathers. Prior to the crisis, working mothers did paid work in 6.3 hours of a weekday on average; this has fallen by over one-fifth to 4.9 hours. Working fathers’ hours have also fallen, but by proportionally less, from 8.6 hours before the crisis to 7.2 hours now.

Mothers are also far more likely to be interrupted during paid working hours than fathers. Almost half (47%) of mothers’ hours spent doing paid work are split between that and other activities such as childcare, compared with under one-third (30%) of fathers’ paid working hours. Where focused work time is important for performance, gender differences in interruptions and multitasking risk further increasing the gender wage gap among parents.

In families where the father has lost his job while the mother kept hers, men and women still split housework and childcare responsibilities fairly equally. In all other types of households, mothers spend substantially more time on domestic responsibilities.

“Mothers are more likely than fathers to have moved out of paid work since the start of lockdown. They have reduced their working hours more than fathers even if they are still working and they experience more interruptions while they work from home than fathers, particularly due to caring for children. Together these factors mean that mothers now are only doing a third of the uninterrupted paid-work hours that fathers are. A risk is that the lockdown leads to a further increase in the gender wage gap.”

“Mothers are doing, on average, more childcare and more housework than fathers who have the same work arrangements, be that not working, working from home or working outside the home. The only set of households where we see mothers and fathers sharing childcare and housework equally are those in which both parents were previously working but the father has now stopped working for pay while the mother is still in paid work. However, mothers in these households are doing paid work during an average of five hours a day in addition to doing the same amount of domestic work as their partner. The vast increase in the amount of childcare that mothers are doing under lockdown, which many are juggling alongside paid work, is likely to put a strain on their well-being.”

Neighbourly relations better now than before the pandemic