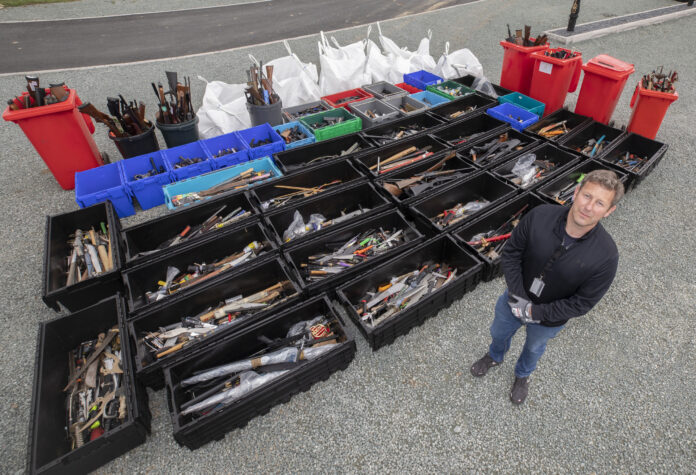 In February, GMP launched the forever knife amnesty after permanent knife bins were placed in 12 different locations across Greater Manchester.

This week when officers from the Violence Reduction Unit emptied the bins – the first time since the start of lockdown – they found a variety of different knives that totalled to 554.

The #ForeverAmnesty is a project run by GMP and the British Ironwork Centre, was launched on a permanent basis following the overwhelming success of September’s amnesty and in further efforts to reduce knife crime across Greater Manchester.

Sergeant Paul Nolan of Greater Manchester’s Violence Reduction Unit said: “The total number of weapons deposited in the bins since February was 554 knives, which is a huge amount considering we haven’t advertised the bins during lockdown. The bins remained available throughout the Covid-19 pandemic as a safe option to dispose of a weapon for those who may have felt vulnerable.

“We are delighted with the number of knives that have been deposited. Any knife or weapon which is handed in is one less on our streets, and more importantly, one less that cannot be used as part of a crime.

“The amnesty is not about secrecy, it’s to allow people to bring a knife to a police station where they can deposit it into a bin. The purpose is to reduce the number of knives on the streets of Greater Manchester and this is proving to be a safe and secure way of doing this.”

“The #ForeverAmnesty is one of a number of initiatives we are progressing to reduce violent crime across Greater Manchester. Through the Greater Manchester Violence Reduction Unit we work closely with partners such as UK Border Force and the Royal Mail to identify weapons imported to the Greater Manchester area. We carry out targeted intelligence-led weapons sweeps which can result in locating weapons hidden for later use. Perhaps most importantly, we have weapon engagement and education with the young people in our region as part of our community-led approach to prevention.”

Greater Manchester’s Deputy Mayor for Policing, Crime, Criminal Justice and Fire, Bev Hughes, said: “GMP’s knife amnesty achieved fantastic results when it was launched last autumn and it’s really encouraging to see this number of knives safely handed into police over the past few months as result of this ongoing campaign. In Greater Manchester, we are committed to getting weapons off our streets and to strong enforcement action where necessary. However, policing activity alone is not enough. We need to understand the reasons why people carry and use knives in the first place, and use evidence, insight and data to intervene early and reduce violent crime and its consequences over the longer term.

“In order to do this, agencies and professionals in health, education, criminal justice and the VCSE sector have come together in the Greater Manchester Violence Reduction Unit (VRU) to share experiences and data, and to engage with communities and young people in particular. As outlined in our recently launched Serious Violence Action Plan, the VRU is investing £500,000 in a community-led pilot that will be rolled out later in the year and will allow residents and VSCE organisations in six Greater Manchester districts to develop place-based approaches and solutions to tackling serious violence in their communities.”

The Greater Manchester Violence Reduction Unit was set up in 2019, with funding from the Home Office, to bring together police, local authorities, youth services, health, education and schools, as well as other criminal justice partners, to tackle serious violence.

Partners are engaging with schools to increase awareness of the consequences of getting involved in violent crime, identifying and working with young people at risk, and developing a community-led approach to prevention and early intervention.

Alongside this, police are carrying out targeted enforcement activity to seize weapons, intercept the illegal purchase of weapons and provide reassurance to communities affected by violent crime

If you have concerns about someone you know or care about who is carrying or hiding a knife, or if you are aware that knives are being concealed in your community, call the Police on 101 or talk to us via LiveChat at www.gmp.police.uk