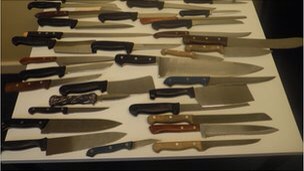 An array of weapons from domestic kitchen knives to swords, axes and hunting blades have been taken off the streets in February during Greater Manchester Police’s Bin the Blade’ knife campaign.

The most unusual items include wartime cutthroat razors, a small knife in the shape of a shotgun cartridge and a number of ornamental daggers.

The Bin the Blade campaign was launched in support of the British Ironwork Centre’s ‘Save a Life, Surrender Your Knife’ initiative, which began in August 2014 with a knife bank in Birmingham. The British Ironworks Centre tours the UK, encouraging young people who are carrying knives to give them up. Surrendered knives will be used to create a spectacular 15-24 feet tall Angel statue in memory of those whose lives have been tragically lost to knife crime.

During the month of February Greater Manchester Police committed to 11 knife bins across the region. The secure bins were designed in conjunction with local voluntary organisation Raising Aspirations and manufactured by the British Ironworks Centre specifically for the surrender and completely free of charge.

The surrender ran from 1 – 28 February 2015, where the force asked members of the public to dispose of unlawfully held or unwanted knives and help prevent them getting into the wrong hands. It gave the public the chance to dispose of knives and other sharp weapons by simply dropping them in one of the dedicated bins completely anonymously.

As part of the force’s ongoing commitment to reducing incidents of knife crime, increased operational activity combined with the surrender has seen at least 1500 blades removed from circulation. The knives will now be collected by the British Ironworks Centre where they will undergo a sterilisation process before being added to the sculpture. The exact number of knives will be confirmed during this inspection.

“This year’s knife surrender was a remarkable success and I am delighted that we have managed to remove over 1500 weapons from the streets of Greater Manchester.