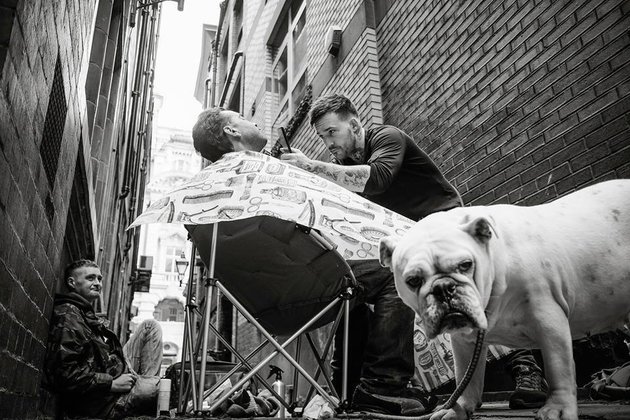 The Christmas event is taking place in Piccadilly Gardens on Sunday 2 December from 12pm – 2:30pm.

It will be the third annual event hosted by the foundation, and will include a variety of different people and professionals coming together to support Manchester’s homeless.

Local food trader ‘Mustard’ will be providing a Christmas dinner for those in need, and will be joined by a doctor and chiropodist to complete medical tests – plus a vet for the many dogs that find themselves on the streets with their owners.

With the help of donations from the local community, sleeping bags will be provided on the day. Event organisers are also calling for further donations from members of the public.

Founded by Ged King following the launch of his barbershop in Sale, The Skullfades Foundation seeks to help the most disadvantaged in society by offering them free barber training with the aim to equip them employability skills.

Ged King, Founder of Skullfades and Skullfades Foundation, said: “I care about people and believe life is more about what you can give than what you can get. In the run up to Christmas, we’re reminded once again of how much the disadvantaged need our support.

“This Christmas event is about giving the homeless community a reason to smile, and to remind them that they’re not on their own and help is out there. Any donations we can get ahead of the event would be greatly appreciated, specifically sleeping bags. The weather is getting colder and it’s important we do what we can for those in less fortunate positions than ourselves.”

The Skullfades Foundation was created in order to help disadvantaged people in the homeless and ex-service personnel community, providing haircuts initially and then training them in barbering skills to increase their chances of securing employment. The charity has since grown, providing food, clothing and sleeping bags at their annual events, and connecting the homeless with support services such as access to addiction coaches and doctors

Throughout 2016 and 2017, the team at Skullfades has had huge success in raising the awareness of the homeless situation both locally in Manchester, across the UK and internationally. The team has now completed two charity walks, walking from London to Sale – with Greater Manchester Mayor Andy Burnham taking part in the 2018 walk.

More recently, the Skullfades team embarked on a journey to cut the hair of refugees staying on camps in both Dunkirk and Calais. The team went above and beyond, travelling with two vans full of donations including food, clothes and children’s’ toys to distribute to the refugees.