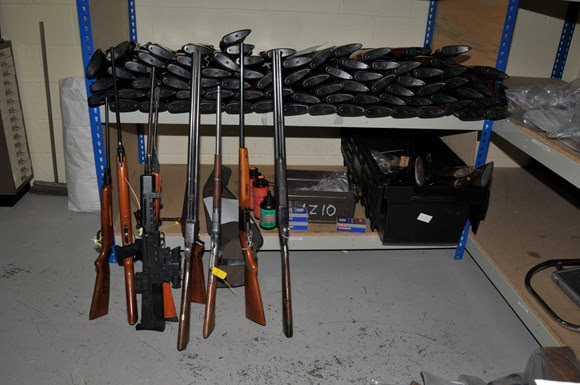 Over 130 firearms have been handed in and taken off the streets following a national two-week long Firearm Surrender.

The National Firearm Surrender campaign, co-ordinated by the National Ballistics Intelligence Service (NABIS), started on 12 May until 29 May 2022 and included every police force in the UK as part of a crackdown on reducing violent crime and ridding lethal weapons from the streets.

A total of 139 firearms – including a self-loading pistol and sawn off shot gun – were handed in. Following proactive work by officers, 12 more were also seized bringing the total to 151.

Firearms legislation is regularly updated and officers urged people to surrender unlawfully held or unwanted guns and ammunition to help avoid them getting into the wrong hands. The aim wasn’t just to target those involved in criminal behaviour, it was also aimed at collectors, licence holders and anyone who may have inherited a firearm.

Detective Superintendent John Griffith, of GMP’s Serious Crime Division, said: “Any ammunition or any firearm that gets handed in is one less on the street for criminals to get their hands on.

“We remain committed to robustly investigating serious crime, specifically targeting those in possession or transferring firearms and ammunition as they post a real, serious threat across the UK. The 30% drop in discharges over the last 12 months across Greater Manchester is a result of some hard work as we continue to take such lethal weapons off the streets.

“Guns have no place in the region and this surrender is a result of continued efforts from officers and our partners as we work together to safeguard, intervene and educate at the earliest opportunity to hopefully save lives and make Greater Manchester a safer place to live, work and visit.

Unlicensed driver who killed 13 year old in Ashton-in Makerfield has his sentence increased...