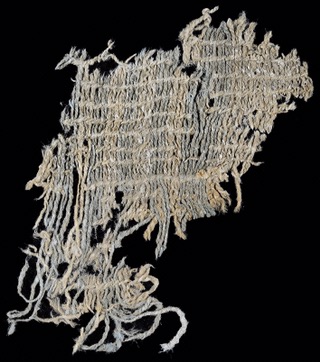 Discovery in Peru is 1800 Years Older Than Textile Previously Thought to be the Oldest Dyed with Indigo.

A researcher at America’s George Washington University has identified a 6,200-year-old indigo-blue fabric from Huaca, Peru, making it one of the oldest-known cotton textiles in the world and the oldest known textile decorated with indigo blue.

he discovery marks the earliest use of indigo as a dye, a technically challenging color to produce. According to Jeffrey Splitstoser, lead author of a paper on the discovery and assistant research professor of anthropology at the George Washington University, the finding speaks to the sophisticated textile technology ancient Andean people developed 6,200 years ago.

“Some of the world’s most significant technological achievements were developed first in the New World,” said Dr. Splitstoser. “Many people, however, remain mostly unaware of the important technological contributions made by Native Americans, perhaps because so many of these technologies were replaced by European systems during the conquest. However, the fine fibers and sophisticated dyeing, spinning and weaving practices developed by ancient South Americans were quickly co-opted by Europeans.”

The textile was discovered during a 2009 excavation at Huaca Prieta, a desert area that offers nearly pristine archaeological preservation on the north coast of Peru. Experts believe the site was likely a temple where a variety of textiles and other offerings were placed, possibly as part of a ritual. The well-preserved artifacts give a glimpse into ancient civilization and lifestyle and offer an unexpected connection to the 21st century.

The development of indigo dye was critical for future trends in fashion, fabrics and textile arts, Splitstoser said.

“The cotton used in Huaca Prieta fabrics, Gossypium barbadense, is the same species grown today known as Egyptian cotton,” Dr. Splitstoser said. “And that’s not the only cotton connection we made in this excavation – we may well not have had blue jeans if it weren’t for the ancient South Americans.”