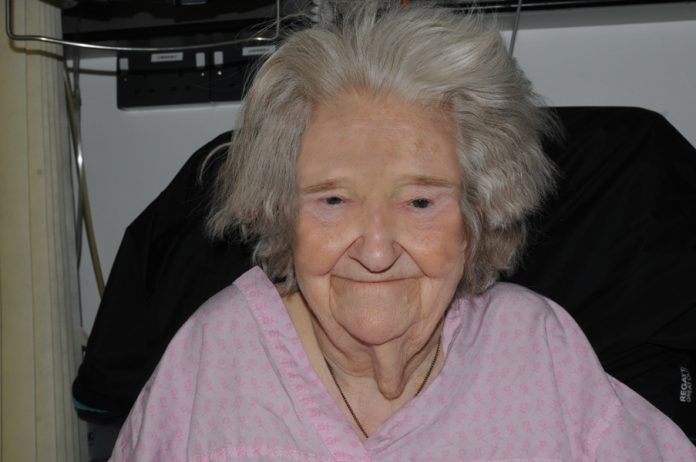 It has been a year since 87-year-old Eileen Blane was brutally attacked in her home and later died as a result of her injuries.

Despite a £50,000 reward, extensive enquiries and appeals to the public, officers still haven’t found her killer.

Today police are re-appealing for information in the hope that people will come forward with new information.

They are also releasing never-before-seen CCTV footage and an e-fit of two men they want to identify.

The grandmother was in her home on Castleton Avenue, Stretford at about 2.30pm on Friday 3 February when a man forced his way into the house.

He beat her relentlessly, demanding cash, before snatching her wedding ring from her finger.While he ransacked upstairs she bravely managed to escape and alert her neighbours.

Her attacker inflicted countless injuries on Eileen including broken ribs, a fractured vertebrae and further internal injuries and bruises.

She was discharged from hospital at the end of March but was sadly found dead at home on Saturday 1 April .

Her attacker is described as white, aged in his 20s, about 5ft 8ins tall, slim build and he was wearing a dark coloured jacket with the hood covering his face.

A £50,000 reward still stands for anyone with information that leads to the successful conviction of the offender.

Detective Inspector John Mulvihill from GMP’s Major Incident Team said: “We have three key sightings on the day Eileen was brutally attacked and we are desperate to hear from the public.

“Firstly, we have an e-fit of a man seen between 1.30pm and 1.45pm on Chatsworth Road – just five minutes away from Eileen’s home.

“He was described as white, about 25-years-old, clean shaven and wearing a dark hooded top with the hood up.

“Secondly, we have CCTV of a young man in Co-Op on the Barton Road at 2.30pm where Eileen had been earlier that day.

“And lastly, a man was witnessed on Castleton Avenue about 3pm near to the junction with Bradwell Avenue. Again this man is described as white, in his late teens to early 20s and he was wearing a dark coloured puffa-style jacket.

“This man had gaunt facial features and sandy/ginger coloured hair which was short at the sides and slightly longer on top.

“I implore anyone who recognises these men to get in touch or if you believe this is you please contact us immediately. It is vital that these three men are eliminated from our enquiries.

“Even the smallest piece of information could be crucial in helping us find the person responsible for Eileen’s murder and hopefully give her family the answers and closure they deserve.”

Police want to speak to this man after a women is sexually assaulted in...