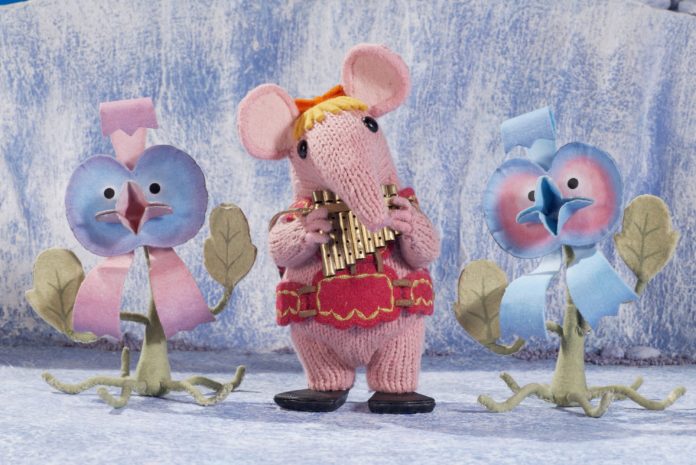 Launching online today, ‘On Stage at Home with Clangers and Nordoff Robbins’ is a brand-new interactive series of musical videos, featuring specially created songs and music for young families to perform whilst at home together during lockdown and beyond, using instruments they find or make.

‘On Stage at Home with Clangers’, features songs created and performed by Louise Gregg, a Nordoff Robbins music therapist, with a little helping hand from the Clangers, to demonstrate the positive impact that music can have on everyone’s health and wellbeing. The videos aim to help preschoolers and their families connect through music, performing songs using homemade instruments, movement, body percussion and voice.

Produced by international rights owner Coolabi Group, in partnership with music therapy charity Nordoff Robbins, the videos were made at home last week by a team of people from across Manchester including Didsbury based Louise Gregg, Clangers co-director Chris Titchborne (using footage originally animated at Altrincham’s Factory), and edited, with additional animation, by Manchester design studio Instruct. The Clangers television show, which the footage is taken from, airs on CBeebies, which is based nearby in Salford.

Specialist Manchester agency Sundae Communications, retained by Coolabi Group since 2014, will deliver outreach and publicity in partnership with the Nordoff Robbins team, including a nationwide press campaign, and support from celebrities and influencers across the country.

The first two videos in the series launched online today at nordoff-robbins.org.uk/on-stage-at-
home, and families with young superstars across the UK are encouraged to make their own videos and performances, to share music and happiness with friends and loved ones online.

Clangers has music and community at its heart, which makes the brand a perfect fit to help Nordoff Robbins champion music as a way to help families everywhere stay as connected as possible, whilst showing that music can be made and enjoyed by anyone, regardless of whether they have instruments or musical training.

John Owens, creative director at Instruct said: “We jumped at the chance to help a great cause whilst getting to working with footage of our childhood heroes. We set to work quickly developing the look and feel with the internal design team via Zoom, whilst editing green-screen footage filmed in Didsbury all within a few days. We are so happy with the final result.”

Fiona McGarva, managing director of Sundae Communications, said: “The Clangers are our first love, as animators Factory and rights owner Coolabi Group are two of our longest standing clients. This is a gorgeous project, bringing together Nordoff Robbins and Clangers, whose brand values have so much synergy, to create musical content with the aim of spreading joy to families across the UK, at a time when it is much needed.”

The first two songs to be released will be:

Let’s Go Finding Sounds, which encourages children to use whatever they have around them to make music, teaching them that you don’t need musical instruments for music to happen. It helps them explore items imaginatively, and to hear all sounds as music as well as helping them to think about the different types of sounds.

Music Machine, which uses different body parts to engage with rhythm and sounds. This encourages coordination development as well as keeping the beat. Combining movement with the beat of music helps children to control and time their movements and to learn the speed and energy that needs to go into different movements. Using sounds with their bodies will also help children become aware of how their bodies themselves are musical.

Sundae is the first Northern consultancy to specialise in entertainment and culture, and the company’s portfolio takes in TV, film, events, festivals, venues, theatre and design, working nationally and internationally, whilst proudly celebrating the North West region.

Instruct Studio is a multi-disciplinary communications studio based in Manchester working within the architectural, media and cultural sector.

‘On Stage at Home with Clangers’  launched on Tuesday 28th April at nordoff-robbins.org.uk/on-stage-at-home

A new LGBTQ+ theatre festival is to run in January 2020 at Manchester’s Hope...