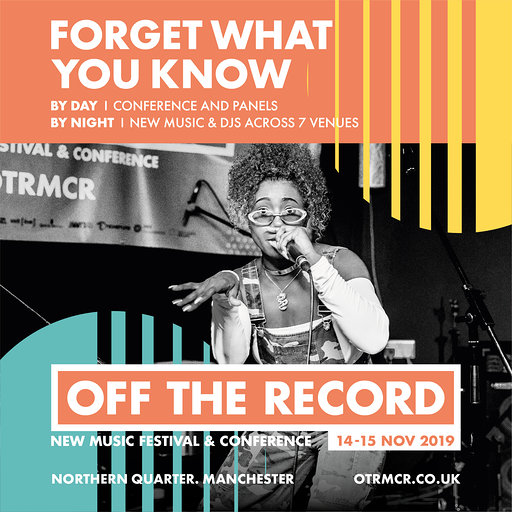 Off the Record – Manchester’s multi-venue live music festival and conference that focuses on discovering and nurturing innovative new music has today announced the first names for its 2019 event.

After three sold-out years, Off the Record, launched by three of the UK’s premier independent music festivals; bluedot, Kendal Calling and Sound City will take place on November 15 across a number of live venues across Manchester’s Northern Quarter. Announced today is the first wave of names including Rebecca Boulton, Sundara Karma, Rob Da Bank and Fickle Friends with the full music announcement including headliners to follow over the coming weeks.

Manager of two of Manchester’s most influential exports New Order and Joy Division and a pioneering force in the music industry, Rebecca Boulton is a welcome addition to the festival and will host the talk: Celebrating 40 years of Unknown Pleasures. Expect a rare insight into one of the most acclaimed albums to be recorded.

Following the success of his recent podcast the A-Z of Festivals, festival creator, label owner and all round music business man, Rob Da Bank will host From the Fields and Festival Director of Kendal Calling, Andy Smith in a one off live recording of the podcast.

Elsewhere, indie rock band Sundara Karma will join the all star conference line-up for an in-conversation discussion whilst indie pop band Fickle Friends will host a song writing workshop for all budding writers.

Off the Record have also today announced some of the hotly anticipated conference talks. These include, How to Start and Run a Venue which will see owners of venues new and old come together to look back on how the business has changed, discuss their challenges and look forward to the future. Also announced is Women in Music: Producing which will explore the opportunities for women within production and engineering, the problems they face to break into a male-dominated industry and what can be done to educate more young women on the opportunities out there.

Ever wanted to know more about the promotional side of music? Just The Type will host the workshop Have A Word: A Musician’s Guide to Writing a Brilliant Biography which will explore the importance of writing great copy and how to approach writing your own press information. Vevo, the world’s leading all-premium music video provider will share their insights and tips on how to use music video effectively in Using Music Videos to Connect with Fans.

Other talks announced today include: UK Official Charts Present: How to Chart, A&R in the Digital Age, Tales from Trailblazers, HeSaidSo Present: How To Navigate Relationships in the Live Industry and a song writing camp with Pirate Studios.

Also added to the bill is Shell Zenner of BBC Radio Manchester and XS Manchester and Emily Pilbeam of BBC Introducing Humberside and Radio 1, who will both be running DJ sets across the weekend.

As well as the music and conference offerings, there will also be free drinks parties, A&R Feedback Sessions, Speed Meetings, a Networking Brunch and a Northern Quarter walking tour. Northern Quarter venue, Band on the Wall will host a closing delegate party with Bandaoke.

By day, speakers, publishers, labels and more will lead the conferences designed to inspire and aid budding artist starting out in the music industry. By night, Off The Record will draw in the crowds of music lovers with new music, hosting performances from over 40 emerging artists across 7 live venues.