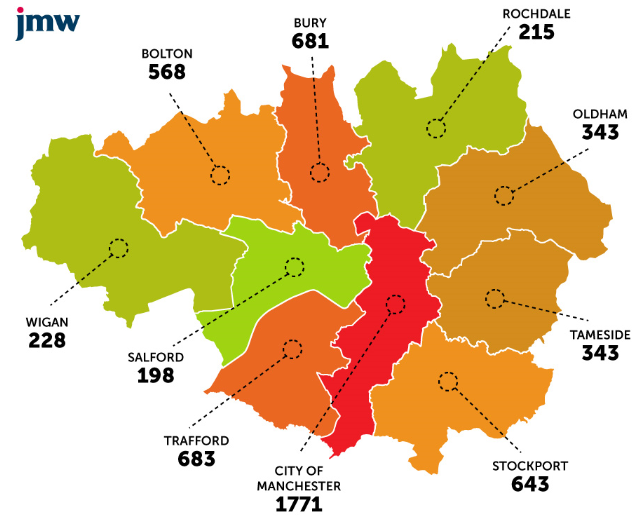 There are currently more than 5,600 potholes littering roads in Greater Manchester causing safety concerns for the growing cycling community and other road users, according to research carried out by personal injury specialists at JMW Solicitors.

The team at the Manchester-based law firm conducted research into data provided by fixmystreet.com, which, as of January 2019, revealed that there were 5,673 reported open pothole cases in the region. The top three worst affected boroughs are the city centre (1,771), Bury (681) and Stockport (643).

Paul Breen, Head of Catastrophic Injury, from the JMW personal injury team, said: “Potholes can cause serious, life-altering injuries to road users, in particular cyclists and motorcyclists. It is vital that these road defects are repaired to allow these road users a smooth commute. Unlike motorists, cyclists and motorcyclists coming across a pothole cannot simply go through it as this will most likely force the rider off their bike. However, they cannot always just swerve around them in case they find themselves in the path of traffic.

“With cycling becoming an increasingly preferred mode of transport across Greater Manchester, it’s likely we will see the number of cycling injuries rise as well. Something that won’t be made any easier if the number of potholes continues to grow.”

The analysis comes as we approach the one-year mark since the Beast from the East sent temperatures plummeting below freezing and resulted in widespread disruption and damage to roads across the whole country in February and March 2018.

It is the council’s responsibility to maintain the roads in their constituency so that cyclists, motorcyclists and other road users can travel safely. This is a legal obligation as stated in Section 41 of the Highways Act 1980.

Paul Breen said: “Councils should be conducting regular checks to identify any potential hazards and ensure any defects are repaired within a reasonable amount of time. If the council fail in their duty to maintain and repair roads and pavements, and someone suffers an injury due to a pothole or other road defect, they are entitled to make a claim for the pain and suffering it has caused.

“Although it’s pleasing to see that the government is listening and responding to the need for road repair investment, the extra £12.4 million funding has already been described by local councils as not being enough to cover the last eight years of under-investment. Consistent investment is needed on our roads to ensure the safety of all road users.”