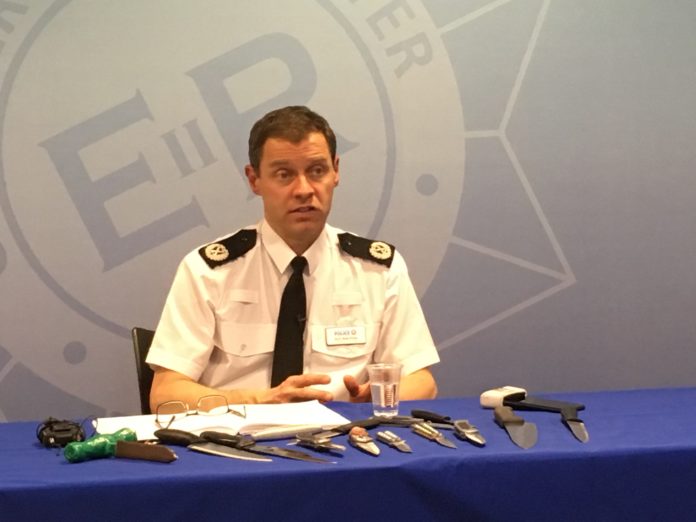 Greater Manchester Police have been invited to submit a bid for extra cash to fight knife crime by the Home Secretary.

Assistant Chief Commisdioner Rob Potts was among a number of officers invited to a meeting with Sajid Javid on Wednesday and revealed to About Manchester that the force had been invited to bid for additional money over the next few days to fill gaps in the force to fight violent and knife crime.

The meeting followed two particular high profile knife deaths over the weekend including that of Yousef Makki in Hale Barns.

Appearing at a press conference sitting behind a selection of knives that the force had found, ACC Potts said that there was a real shared concern over the problem and a collective will to tackle the problem at a national level.

“What came out of the meeting is that there was a real imperative to take action and a shared acceptance that we have to work with partners to tackle this challenge.”

It is extremely difficult to quantify in Greater Manchester he said but from about twelve to fifteen months ago, the force had noticed an increase in levels of personal violence with people carrying knives.

Increased stop and search found people carrying knives for their own protection.There was a perception, he added, that carrying a knife gave an individual more protection but in fact it was quite the opposite.

The Assistant Chief Constable wouldn’t be drawn on the specific causes but defined that there could be a link between officer numbers, cuts in social services,truancy and exclusion but he left little doubt that the reduction of 2,000 officers in the force since 2010 had contributed.

An additional 320 officers are being recruited to the force over the next twelve months, funded by an increase in council tax and fifty officers will be assigned to a newly formed proactive group tasked with tacking so called priority issues of which knife and violent crime will feature.